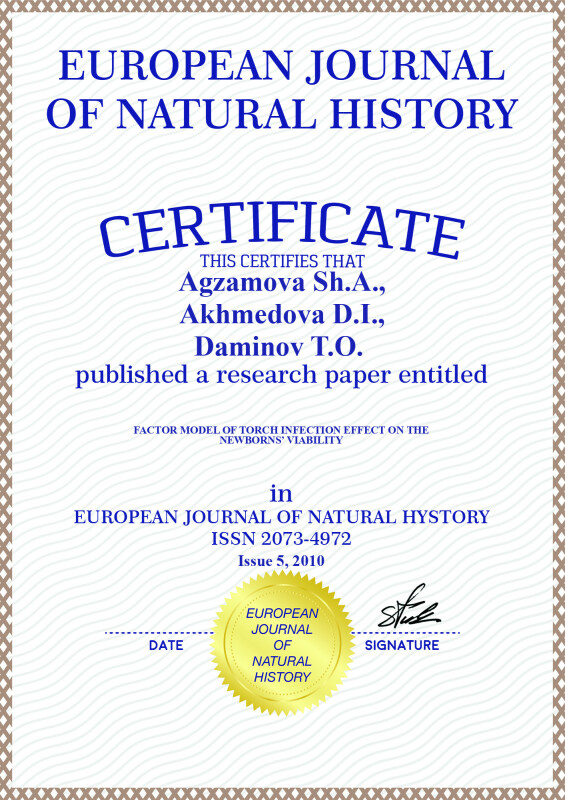 FACTOR MODEL OF TORCH INFECTION EFFECT ON THE NEWBORNS’ VIABILITY

Today intrauterine infections by infectious matters of TORCH complex constitute the most urgent and debating point of modern pediatrics. Recently structure of infectious morbidity of a pregnant woman, a fetus and a newborn has changed. Role of pathogens of sexually transmitted diseases (STD), such as, chlamydial and micoplasmal, viral infections, such as, herpes simples virus and cytomegalovirus, anaerobic infection and fungi has acutely increased. Wide spread of TORCH-infection among women of reproductive age allows setting aside a problem of intrauterine infection and viability of newborns as one of the most urgent [1-9]. The study aimed at setting the most significant factors affecting viability of newborns in association with intrauterine TORCH infection aside.

Analysis of all-up examination of 419 deliveries in women with chronic latent TORCH infections constitutes the basis of the study. Etiological verification of intrauterine infection of newborns was performed by 5 pathogens, such as, Herpes simplex virus (type 1/2 HSV), Cytomegalovirus (CMV), Chlamidia trachomatis (Ch), Toxoplasma gondii (T) and Ureaplasma urealyticum (U) by means of immunoenzymatic assay and PCR in the samples of umbilical cord and venous blood, urine and epipharyngeal scrapping. Gene diagnostics was conducted at the functional genomics laboratory, Institute of Genetics and Experimental Biology of Plants, Uzbekistan Academy of Sciences. Immunoenzymatic assay (IEA) for specific (anti-IgM and IgG) antibodies to TORCH pathogens was performed by means of test systems ("Vector-Best" Closed Joint-Stock Company, Novosibirsk, Russian Federation). To differentiate intrauterine infection IgG antibodies avidity index was used (IEA - anti-G-avidity, "Diagnostic systems" Scientific-Production Association, Nizhny Novgorod, Russian Federation). Testing and interpretation of findings was performed at the "Immunogentest" center, Institute of Immunology, Uzbekistan Academy of Sciences. General clinical examination of pregnant women and newborns was conducted in compliance with the standard methods. All results were registered in information cards specially developed for the study. To process the results MS Excel-XP and Statistica 6.0 [10] programs were used. Correlation analysis was performed by Kendall´s method (Rk). To formulate a model and perform a factor analysis we used a method of principal components, "Varimax normalized" factor space rotation method.

Given noticeable achievements in the prevention of intrauterine infections, a number of issues remain open. To name these, taking into account teratogenic effect of toxoplasma and 1/2 type HSV in primary infection during pregnancy it is impossible to ascertain risk of onset and progression of the complications above on the basis of some previous confidently described cases [8, 9]. In all examinees IEA showed absence of IgM-antibodies to CMV and type 1/2 HSV. Absence of IgM cannot serve as the grounds for clinical diagnosis elimination, since IgM presence can be masked by high concentration of IgG [5-9]. In other cases IgG level in infants was lower than the one in their mothers. Significant increase of IgG antibodies titer took place in 83 infants (7.16%). At birth neither clinical signs of intrauterine infection nor pathologic course of early adaptation could be registered in all newborn examinees to perform planned vaccination and to discharge them from the maternity house. On 20-35 days of life clinical picture of intrauterine infection was observed in 35 infants (30.2%), manifesting in central nervous system injury, hepatomegalia, icteric viral hepatitis syndrome and pneumonia and necessitating their hospitalization at the newborns´ pathology department. It should be noted that IgGs of low avidity were registered in the infants. Detection of IgGs of low avidity in blood can be the evidence for primary infection, the fact clinically confirmed [11, 12].

Thus, assessment of clinical data of the infected infants showed presence of residual and subclinical infection forms in 30.2% 69.8%, respectively, residual one being associated with high degree of stigmatization and anomalies in development of osteocartilaginous tissue and urogenital system. Assessment of clinical and paraclinical data of the infected newborns showed intrauterine development retardation in 35.5% of them (respectively, 6%, 22.5% and 12.5% of hypotrophic, hypoplastic and dysplastic types). As to Apgar score, 27.6% of the infants scored 6-7, 24.1% of newborns having 5-6.

Factor analysis allowed setting aside 10 general factors determining structure of factor effect on the viability of the newborns in TORCH infection. The factors with the 73.1% of factorization completeness determined character of casual effect, insignificant and non-identified factors in the model brought together into so-called "zero" factor (F-0: 26.9%). Newborns´ viability factor
(F-1: 15.6%) determined somatotypical parameters, such as, body mass and length, head and chest circumference as well as integral assessment by Apgar score.

The second factor set aside (F-2: 9.7%) was found associated with conditions of realization of vertical mechanism for infection with CMV, HSV and toxoplasma. Of interest, the effect of chlamydial infection on newborns´ viability was represented by separate factor (F3: 8.2%). Newborn sex factor in the model of viability (F4: 7.8%) influenced body mass and length being associated with a birthing mother´s blood group. Ureaplasmatic infection was set aside as a separate factor too (F-5: 6.6%). Clinical ultrasound results of "uterus-placenta-fetus" system examination and fetometric parameters were part of the 6th factor (F-6: 6.5%) and were associated not only with the vascular abnormalities, but also with the type of delivery. The 7th factor (F-7: 5.1%) influencing the newborns´ viability was determined by birthing mothers´ age and was associated with the amniorrhea term, newborns´ body length and presence of toxoplasmosis markers in the umbilical blood. Complications in the recent and late pregnancy were set aside as a separate factor (F-9: 4.4%) associated with the women´s blood groups as well as with the presence of mixed IEA-markers of CMV and toxoplasmosis. The 10th factor of newborns´ viability upon TORCH infection in the birthing mothers (F-10: 4.3%) was determined by intrauterine infection with CMV and HSV being associated with early amniorrhea.

Relatively high risk of intrauterine fetal infection upon TORCH infections in pregnant women was confirmed by results of nonparametric correlation analysis. Upon comparison of the pregnant women´s blood IEA results with those of PCR in the newborns direct dependence between presence of infection in the birthing mothers and their newborns was determined for HSV (Rk=+0.415, p<0.001), Ch (Rk=+0.579, p<0.001),
T (Rk=+0.422, p<0.001) and U (Rk=+0.648, p<0.001). Of interest was determination of statistically confident tendency in the presence of negative correlation relationship between the newborn´s body mass and presence of positive PCR result for HSV in venous blood (Rk=-0.316, p=0.009). Apgar score assessment showed negative correlation with PCR markers for HSV in the newborns (Rk=-0.432, p<0.001).Reverse character of the relationship is determined for IEA markers for toxoplasmosis and ureaplasmosis in the pregnant women (Rk=-0.433, p<0.001) indicating low probability of their combination in mixed infection. Presence of IEA marker for T in the pregnant women showed negative correlation with positive results for CMV in the newborns (Rk=-0.561, p<0.001) and HSV Rk=-0.419, p=0.008). Definite antagonism or manifestation of a protective effect in toxoplasmosis for viral infections is implied by that naturally requiring more detailed study and confirmation.

Thus, we have found positive correlation with type of delivery and chlamydiosis markers in the epipharyngeal scrapping and urine samples (Rk=+0.342, p<0.001, Rk=+0.511, p<0.001, respectively), between term and type of delivery a tendency for existence of negative relationship (Rk=-0.338, p<0.04) being observed. Similar character of correlation between recent pregnancy complications and parameters of newborns´ head circumference (Rk=-0.361, p=0.004), presence of late pregnancy complications (Rk=-0.339, p=0.004) and IEA markers of Ch in the birthing mothers (Rk=-0.417, p<0.001). Thus, IEA markers of chlamydiosis negatively correlated with signs of cardio-vascular abnormalities in "uterus-placenta-fetus" system as per clinical ultrasound findings (Rk=-0.516, p<0.0010). Of interest is the fact that recent pregnancy complications were found to positively correlate with IEA markers of toxoplasmosis (Rk=+0.419, p<0.001). Late pregnancy complications had a negative correlation with the newborn´s sex (Rk=-0.302, p=0.015) and Apgar score assessment (Rk=-0.38, p=0.009). IEA markers of CMV in the pregnant patients positively correlated with HSV findings (Rk=+0.270, p=0.001), implying high frequency of mixed forms. CMV infection in the pregnant patients has a statistically confident association with the fetus´s viability (Rk=+0.341, p=0.004) as well as with the newborns´ head circumference (Rk=-0.302, p=0.015) and positive PCR findings of CMV in the umbilical blood (Rk=+0.487, p=0.001) confirming the fact of intrauterine infection. Statically confident positive correlation between blood circulation disorders in the fetoplacenta complex found by means of clinical ultrasound and positive response to CMV in a newborn (Rk=+0.415, p=0.009). Viability of both a fetus and a newborn positively correlated with the newborns´ head circumference (Rk=+0.316, p=0.009) and Apgar score assessment (Rk=+0.462, p<0.001), viability index negatively correlating with the manifestation extent of cardiac abnormalities in fetoplacenta complex (Rk=-0.380, p=0.001).

Model for TORCH infection effect on the newborns´ viability allowed setting aside 10 most significant factors, associating with peculiarities of birthing mothers, course of pregnancy, intrauterine infection risk, pathogen´s type and somatotypic parameters of the newborns. Determination of statistically significant regularities and phenomena of interrelation between TORCH infection markers in birthing mothers and newborns allow speaking of high intrauterine infection risk upon HSV and chlamydiosis. Study on correlations of newborns´ morpho-functional status makes possible setting aside statistically significant interrelations existing in TORCH infection. As the result, new approaches to development of methods for prevention and prognosis of pregnancy and delivery outcomes are possible.