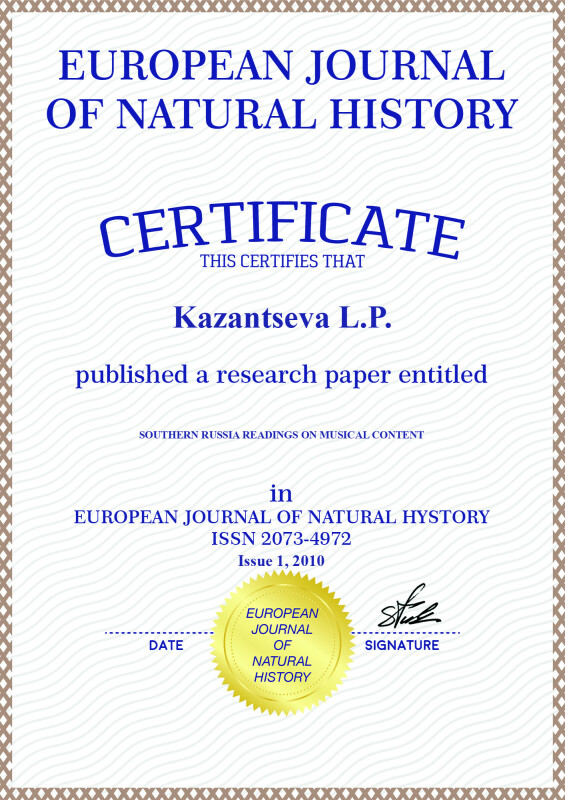 Article in PDF
126 KB
For the latest decades in the "Tree" of the home musicology there has been intensively growing a branch called "musical content". It is an actual scientific trend examining the artistic image-bearing side of music. This trend, having such ponderable achievements as the works of B.L. Yavorsky, A.F. Losev and B.V. Asafyev, later by M.G. Aranovsky, Ya.S. Druskin, L.A. Mazel, V.V. Medushevsky, Ye.V. Nazaykinsky, A.N. Sokhor, Yu.N. Tyulin and a number of some foreign investigators has been actually supported and moved forward with the efforts of a great number of both competent and young scientists.

Nowadays the problems of musical content attract a lot of investigators. Yet, it is likely that the trend is being most developed in three scientific schools, really existing in Moscow, Ufa (in the "Laboratory of musical semantics") and in Astrakhan - Volgograd. The illustration of this fact is that to the works of the musicologists leading the schools, namely: V.N. Kholopova, L.N. Shaimukhametova and L.P. Kazantseva there join the new publications of their followers. Four conferences devoted to the image-bearing principles in music: "Musical content: science and pedagogy" (Moscow, 2000; Astrakhan, 2002; Ufa, 2004) and "Musical content: modern scientific interpretation" (Rostov-on-Don, 2006) held in the latest decade, attracted a lot of scientists, holding identical ideas and gave corroboration of the great interest in these problems.

Besides this, in Astrakhan (2007) and later in Volgograd (2008, 2009) the Scientific Readings on the problems of musical content have become regular and traditional. The scientists, representing the higher musical institutions of the cities mentioned and also the investigators from Krasnodar, Maikop and other regions participated in them. At these Readings the participants promulgate their new ideas on the subject.

At a first glance our Readings are reminiscent of conferences, habitual for any scientists. Though, yet they are aimed not so much at the messages of information, as at their discussion. Questions, commentaries, reflections, advice, prompts - all these for what far from always there isn´t enough time at a regular conference - interlace now and then a rather lasting, but always a constructive discussion which turns out to be a general "genre" of these Readings. All those present at the Readings particularly value the positive atmosphere of sincere interest, reigning at the Readings and inter-personal contents, so rare nowadays and therefore so extraordinarily highly appreciated ones.

The latter is no wonder, as the Readings attract people of the creative initiative, who are constantly in the process of scientific research and who crave to share not only their boons but also their doubts, guesses, hypotheses with the persons, holding the same views. To a certain degree thanks to such a "scientific laboratory" the constant participants of the Readings successfully work at their dissertational projects, maintain their theses (T.S. Andrushchak, M.V. Salnikova,О.V. Shepsheleva, O.V. Shmakova, I.I. Vasiruk - 2008) and their theses for a Doctor´s degree (P.S. Volkova - 2009). They publish their monographs [1] and articles, take part in scientific conferences on various problems. On 2009 the author´s collective of the Readings became a main body of the scientific school, officially registered under the title of the "Musical content" and its leader, the Doctor of Arts, professor, Academician of International Informatization Academy, correspondent-member of Russian Academy of Natural Sciences, Honoured Science and Education Worker L.P. Kazantseva has been awarded with the honorary title of a "Founder of Scientific School".

The work was submitted to international scientific conference « Cultural heritage of Russia and the modern world», UAE (Dubai), 13-39 October 2009. Came to the editorial office 18.11.2009