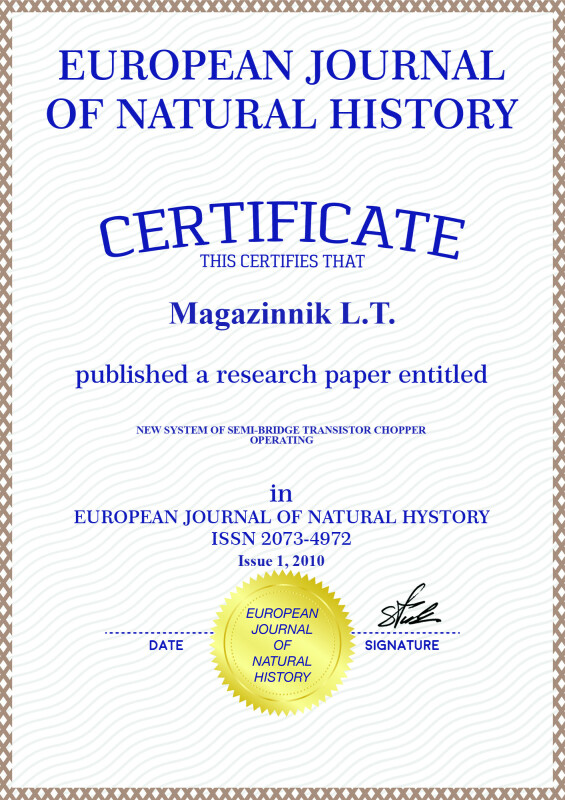 Article in PDF
161 KB
Transistor choppers, both single and two cycle, have found a use in different secondary power supply sources [1]. Transistor chopper operating systems are devised on typical microcontroller level [2]. This system is used to operate any two cycle chopper and may differ only by the quantity of output channels (for one bridge- four channels, for semi-bridge- two channels). The operating system generates impulse signals at operating inputs of chopper´s transistors, on-off time of which determines the duration of transistor´s on-mode. In semi-bridge chopper the necessary transistors´ on-mode duration decreases by the stress growth. That means the necessary transistors´ on-mode duration may be much less than the duration of gating impulses from the operating system´s output. That leads to outrageous wastage in transistors.

Capacitors´ 4 and 5 and transistor´s 6, 7 exposed ends are combined and respectively connected to direct-current voltage source.

As soon as strain at the capacitor, for example 4, reaches 0, "unit´ disappears at output of logical two-input element "I" 13, transistor 6 will close, and accumulated electromagnetic power in load 10 will discharge circuitally: load 10 - diode 9 - capacitor 5 - load 10. Besides, the discharge current will go through energy supply´s output capacity.

Wastage in transistor 6 at this interval is excluded, and accumulated electromagnetic power in the load partially goes to capacitor 5, partially returns to energy supply. Apparently, the efficiency of the suggested mechanism is higher, when load current is more, for example, while using a chopper for power supply through an electric arc´s reducing transformer in a welding set.

The work is presented for an International Science Conference "Contemporary issues of science and education", Moscow, February 16-18, 2010. Came to the editorial office 1.12.2009.