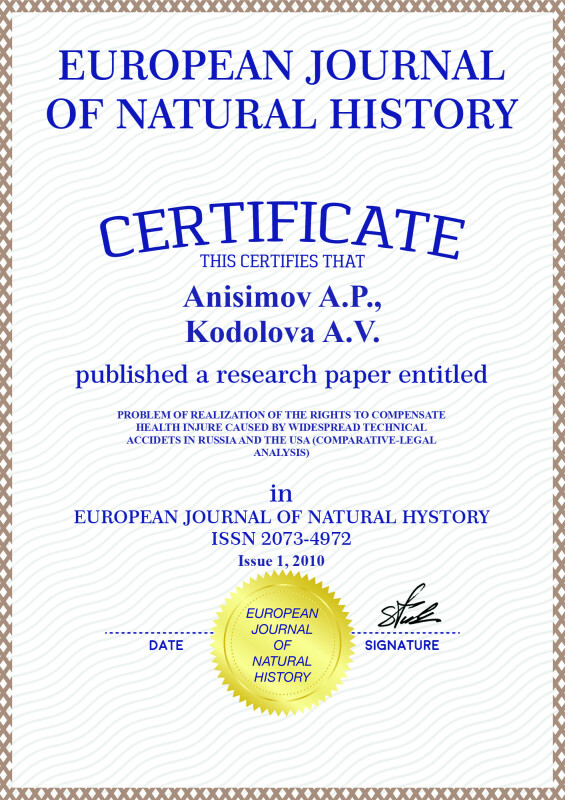 According to its practical importance the human right to compensate health injure or property losses caused by environmental law violation is in fact a way to protect the favorable environment. Its effective realization is of great importance based on the data obtained 20-30% of population diseases are directly related to the provoking environment contamination. So the human right to compensate health injure caused by the environmental law violation is an urgent problem today.

The mechanisms of the rights realization are quite different. It depends on the law systems of the state. In the Anglo-American law system based on the law followed by the juridical practice some certain cases on damage compensation caused by various mass torts including environmental law violation are presented.[2] Alternatively the Continental law system is based on the following concept: the right is the law on the people behavior on the basis of which juridical practice is formed.

In the states of this law system the legislative principles of health injure and property losses compensation are included into the civil legislation acts. The Russian Federation is a state of the Continental law system where the certain legal problems associated which the realization of the civil rights to health injure compensation caused by immense technological accidents have existed though the rights is based on the Constitution of the Russian Federation (a.42). In accordance with the general law, health injure and property losses are compensated on the bases of the clauses of the civil legislation which, in its turn, is based on the Civil Code of the Russian Federation. Nevertheless, compensatory payments to those people suffered from environmental disasters are appeared to be an exception to the compensation law. For the compensatory payments to be given the size of the disaster should be defined. But it is hard to be done. So the people suffered are paid some fixed sums from the state funds or they are given some social benefits. According to the previous experiences those kinds of payments are used in case of immense industrial accidents, extreme situations resulted in victims, mass diseases, property losses or natural objects damage on the large territory. Environmental damages caused by the accidents in the past are compensated in the same way. This kind of compensation is paid to those who injured because of the accidents only in case of the direct law which includes the according clauses on benefits and payments. The situation must be considered by the authorities and the suffered must be paid according to the event happened. In the case mentioned above it is the state that compensates the health injure and property losses considering the territory and the number of the injured. The compensation cannot be paid according to the civil or any other branch of the legislation.

Environmental disasters, heavy technological accidents affected the life and health of a great number of people, the natural and juristic people property, the state and the environment are referred to as mass torts in the juridical literature.[3] In some legal system, particularly in the system of the USA bringing some services to trial for civil law violation, or mass torts, is positively considered, i.e. there is a certain category of cases, named «mass environmental torts».[4] Cases on compensation for being injured due to toxic or environmental disasters or pollution in any region are related to this category.

Russia could not avoid consequences of mass torts either. And it should be mentioned that compensations is paid out within the limits of social maintenance and social insurance but not by the civil law. Constitutional Court of the Russian Federation established the present situation as follows: as damages caused by heavy disasters are uncountable and hard to be made up, the task of the state is to define the size and the order of the compensational payments the injured may not give proof of the health harm. By today a different compensation order is established by the law on radiation accidents considering several n-accidents in the past as well as by the law on extreme situations (Federal Law «On social compensation of the citizens being irradiated due to the accident at Chernobyl Nuclear Power Plant», 1991; Federal Law «On rehabilitation special programs of Radioactive contaminated territories», 2001). Recently the Russian legislation has been changed due to ratification of the Convention on Civil liability for Nuclear Damage. According to those amendments in case of accidents another compensation mechanism is to be used on radiation hazard objects in future. Civil liability of the organization is limited in the size of the specially organized fund and the Government of the Russian Federation must compensate losses and harm if the limits of the organization are exhausted.

The problem of mass torts can be considered from the procedural point of view. In the legislative system of the USA so-called class actions are widely used. In case if the action is proven to be class action the process of harm compensation has some peculiarities. They are as follows: all the injured are paid the compensation no matter if their names have been included into the action for damage or not. One of the conditions for the action to be considered a class action by the court depends on the fact how heavy the disaster is. So mass torts and class actions are appeared to be dependent: a muss tort can be referred to as a reason of the class action, which is the consequence of mass torts.

Unlike an individual action, to meet a class action means to recognize law violation considering the companies which have not been joined the claim. Thus, class action are often made not only for being satisfied but for being unjuridically settled. It is rather hard to speak in what areas claims appear and make a list of them due to the fact that mass torts as well as class actions may occur in different areas. So, class action have been made in the field of computer technologies (well-known claims against Microsoft), so-called «pharmaceutical cases», «environmental cases» and others. The Civil Legislation of Russia does not deal with class actions. Such cases should be considered by the institution of procedural participation.

So it should be concluded that the claim on damage compensation at extremely dangerous objects cannot be satisfied by the existing legal system, but it is quite possible to be carried out by west law system. There are two quite different opinions on class actions introduction into the Russian law institution. In Russian juridical literature those who are «for» consider civil cases to be taken into account more effectively and satisfied. Those who are against consider class action to provide raiders.

In our opinion class action in Russian law system must exist. They can be effectively used in realizing the right to damage compensation at ecologically dangerous enterprises. The law to make class action guarantees the total compensation for the injured resulted from heavy technical accidents and disasters.