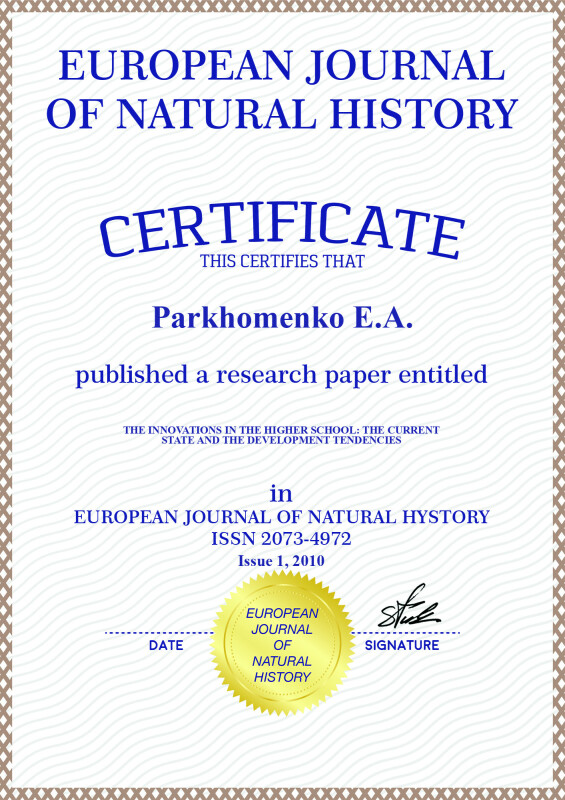 THE INNOVATIONS IN THE HIGHER SCHOOL: THE CURRENT STATE AND THE DEVELOPMENT TENDENCIES

Article in PDF
145 KB
During the 20th century, the experiments are intensively being carried in the search of the school and the Institute of the higher education development new ways in the world - wide practice. Consequently, the enormous variety of the schools types is being taken its place [4, 5].

The world - wide education spatial structure is being embodied and realized the territorial and the statistical proportions in the national system development of the every country, the separate regions and the continents, the global interaction between the educational systems of the separately taken countries and the regions [1].

Such properties and the features, like the dynamism, the internationality, and also the various connections density between the constituent parts and the educational systems concentration are quite character and typical, especially for the world - wide educational space [7].

Thus, the separate regions types have already been formed and developed, in the result of the world - wide integration processes towards the end of the 20th century. The last ones have already been organized by the international cooperation indication in the field of the education and the influence degree upon the other countries and the regions educational growth and the further development. So, the Western Europe, the USA and Canada, the Latin America, Africa (besides the South African Republic - SAR), the Asian and the Pacific regions, and also the former USSR (e.g. CIS) and the Eastern Europe regions are being related to them [2].

The UNESCO is carrying out the normative legal support function of the world educational space development process.

At the present time, the following educational models have already been made up in the world [7, 10].

The French Model: the united college - the technological, the occupational and the general lyceum - the University, the MA course and the postgraduate (PG) course.

The German Model: the general school - the non - classic secondary school, the gymnasium and the middle school - the Institute, the University, and the postgraduate (PG) course.

The English Model: the consolidated school - the Grammatical and the secondary modern school - the college - the University, the MA course and the postgraduate (PG) course.

The educational system is continuously being developed in the contemporary Russia, and the constant renovation and the self - development is character and typical for it. Especially, the powerful innovative process has been spread the Russian educational system in 1980 - 90 - es years. The gymnasiums, the lyceums, the colleges, the schools of the different profiles and the various directions, such as: the merchant, the Cossack, the farm, the marine schools, the cadet corps, the adaptive educational Institutions, the laboratories - schools, the original educational complexes, and also the national schools (e.g. the Jewish, the Kalmyk, the Nenets, and the Finnish ones) have been appeared, instead of the former united and the uniform school. So, the international schools and the Universities, the private schools and the Institutes of the higher education, the colleges and the Universities have also been appeared in the united educational space [6].

The elementary school, the secondary school, and the higher school development history not only is being continued the specific country traditions, but it is also being entered into the world - wide experience. Therefore, they say, as on the school and the Institution of the higher education general tendencies, well as on the defined and the specified country´s national educational system [3].

In the history process, the specific types and the special models of the educational systems have already been made up, and they have been formed in the different and the various countries. But, the University has already been accepted, as the higher education universal type and the kind throughout the whole world [9].

They usually judge on the school or the Institute of the higher education, the college or the University efficiency by the generally accepted criteria, and the indications, and the indices in the world - wide practice.

Thus, the University education, the science and the culture correlation is usually being considered in the different and the various aspects [9]:

Today, the whole world is being united by the concern on the citizen´s upbringing, education and the training of the whole planet. Therefore, the world - wide Community is being tended effectively to the human formation and the foundation global strategy creation, irrespectively from his residence place and also his educational level [4].

At this time of the days, the world - wide educational space development tendencies are being predicted, and the regions types by the educational systems interaction indication are being singled out, and also their responses upon the integration processes. All the countries are being united by the comprehension, that the up - to - date education will have to be the international one. That is, the University education is being acquired the poly - cultural education features and the characters. In other words, it is being developed the possibility to assess the phenomena from the other person´s position, the other cultures, and also the other social and economic formation. Thus, the poly - cultural medium is being created, having assumed the cultural self - determination freedom of the future expert and the specialist and also his personality enrichment [5].

In the world, the tendency is being revealed to the different and the various types of the Institutes of higher education, the colleges, and the Universities integration (under the aegis of the classical University) into the educational scientifically megapolises of the continental, the inter - regional and the state significance. Now, the Universities consolidation with the industrial complexes is being observed in the different and the various countries. Thus, the basis and the necessary foundation are being formed for the scientific inquiries and the further investigations, and also the unique experts´ preparation and the specialists´ training for the contemporary firms, the present companies and the enterprises [4, 5].

The higher education system reformation in Russia is being characterized by the optimal correspondence searching between the established usages and the traditional evidences in the domestic higher school and the new trends and the ideas, having connected with the entry into the world - wide educational space [10, 11].

The modern innovation main trends and the tendencies in the University education system are the following [9, 10]:

Therefore, the Russian Institute of the higher education, the college, and the University transformation is being observed into the research - test work regime on the new academic curriculums, the educational standards, the new educational technologies, and the management structures approbation and their further approval.

The Institutes of the higher education, the colleges, and the Universities, having changed in the innovative searching process, are being related to the self - developing educational systems category.

The schools and the Institutes of the higher education, the colleges, and the Universities, as the world - wide instructional - educationally systems have already been passing many centuries - old way of its historical development. On the one hand, they have exerted the considerable influence upon the accumulation, the preservation and the culture and the society progress, as a whole, and, on the other hand, they have felt on themselves the cardinal changes variety, having passed in the society, the science, and the culture of all the countries and the nations [6, 7].

So, the University is raising much high up to the mankind achievement tops the whole mastering and the human creation of the cultural values process. It is being conditioned and the fact, that the University educational content is continuously being enriched from the cultural heritage of all the countries and the nations, from different and the various fields of science, the human life and his practice. Therefore, the higher education is being became the necessary and the significant development factor, as of the separate spheres (e.g. the economy, the policy, the culture, and the science), well as of the whole society [9].

Thus, the pedagogical Universities are quite able to give the help in the new knowledge receiving on the educational practice challenges in the world, to render the necessary assistance and the help in the number of the actual challenges of all the education levels and the types, as the educational, the cultural, and the research and scientifically centers. So, the Universities potential and their autonomy are quite able to be used for the large ethical and the scientific and the pedagogical, and the social challenges solving, with which the mankind and the society will be dealt with in the near future, and also to be served the integrating element of the general education system modernization, having kept and preserved the best traditions of the domestic education [9].

None development is not quite able to be without the higher education: exactly the higher school is fully responsible for the teachers´ preparation and the further training, for the programs development, and for the investigations carrying out in the education field. So, the Universities will have to be the active participants of the actual and the burning issues and the urgent challenges solution of the present: the misery, the intolerance, the cruelty, the illiteracy, the hunger liquidation, the environment protection preservation. Thus, the school education radical reforms comprehension is being gone on in the framework of the pedagogical University in the end of the 20 - th century, and the management new philosophy formation by the education and by the educational policy [9, 10].

The work is submitted to the Scientific International Conference «Innovative Technology in Higher and Vocational Education», Spain (Costa del Azaar), August 8-15, 2009. Came to the editorial office on 01.07.2009.