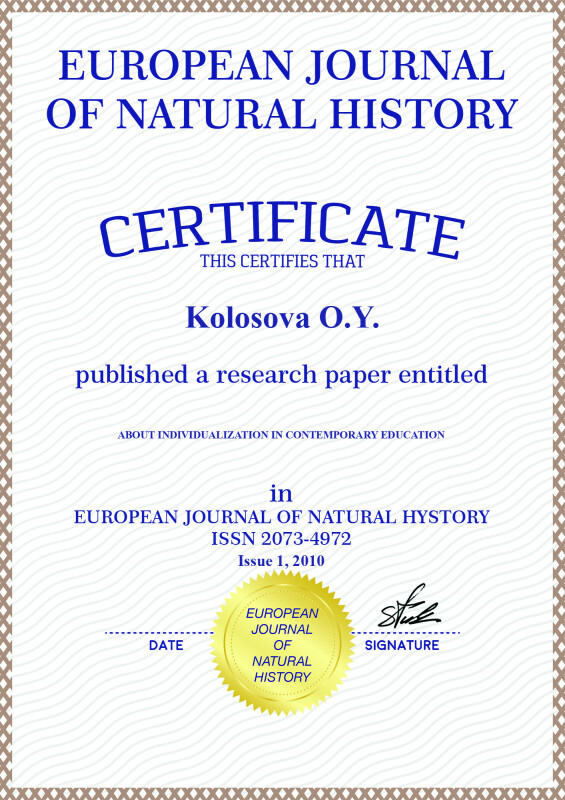 ABOUT INDIVIDUALIZATION IN CONTEMPORARY EDUCATION

Article in PDF
131 KB
папиллярный рак щитовидной железы
электронная микроскопия
There´s an intensive search of a new model of educational system that could meet aims of the 21st century or maybe even the whole third millennium at present time. Orientation for the future can be carried out by, for example, metaeducation [1]. The concept of metaeducation aims to bring processes of globalization in society under regulation and remove their elemental negative consequences. It is not a secret, that scientific worldview taught at school and university is often separated from the contemporary worldview. Knowledge separated from life is not functional.

Metaeducation (from Greek meta - between, after, in) - is a transit from social knowledge to social self-consciousness as pre-behavioral structure, from generalized worldview perception - to a worldview, human´s understanding of his place and his real role in Society and Nature. The strategy of metaeducation comes from "the ideal of learning people", formulated by V.I. Vernadsky, and reflects such characteristics of Russian civilization as "big space" and "big time" (according to M.M. Bakhtin).

It is exceptionally important for metaeducation as constant educational process to differentiate reflection of individual self-conscience from metareflection of social self-conscience. Metaeducation gives necessary stability to all information culture, including video sequence and information infrastructure, provides continuity, creates premises of civilizational and personal identity, warns from moral mistakes and substitutes of morality, and confirms verity as basis of normal social conscience [2].

It´s known that in cognition methods that allow arresting subjective feelings and create objective worldview are being worked out. Occurring function totalitarianism allows viewing individual singularity and deviation from standard as pathology or right violation. We can´t, certainly, say that this program was general and had 100 per cent success, but it formed people and deformed them. A right for individuality had few and it should have been enough reasonable (extraordinary brilliance or special economical position).

It is not mere chance that theory of individuality has not been worked out for a long time. Seemingly, natural man´s aiming to be noticed and to take the highest position get devastating. His conscience loses the feeling of big time and far consequences of his deeds and replaced by short-timed situations appeared because of needs.

The meaning of concept subjectiveness is changed in a new paradigm. It has been thoroughly arrested from all forms of conscience as a source objective view deformation. Research methods that reduce the effect of deformation brought by a human were and are still being worked out. And beyond scientific research subjectiveness was considered a reason of false conclusions.

In the sphere of social activity professionalism, specialization, role adequacy was defined by features, equally obligatory for everyone. This function totalitarianism demanded from everyone dispensation from subjective peculiarities as from hindrances lowering the final results.

Even in the sphere of communication general rules were worked out; they should save a man from conflicts, caused by people´s differences and their subjective preferences [3].

Contemporary situation supposes reconsideration of human´s subjectiveness meaning. In the sphere of perception we discover a number of appearances that come to a man only through personal experience. The same corresponds to the field of specialized knowledge, but the greatest part of life situations may be cognizes by subjective experience. M. Mamardashvili wrote about it "...There are such events that should be overlived and over again adjusted, born in a bed of endless potencies" [4].

He named this form of cognition individulation and insisted on its importance in a man´s life:"...who and what will I be depends on the world individuation, a lot in me and my fortune depend on that unique form in which I, for instance, fell in love or made my first experience of live, as on any other essential human feature or condition" [4].

In the sphere of different forms of activity human psychosomatic polymorphism and subjective peculiarity of human experience can be considered as not yet used potential of the humanity. Of course, that supposes profound research of things connected with the subjectiveness of peculiarities, and should be included in the development program as an important branch. Moreover, analyzing human subjectiveness we may point out one more peculiarity. Preferences, predilection, subjective selectiveness means for a man an opportunity to act without any coercion, to do well without discipline regulations, to keep an appearance in voluntary not-falling attention. And it is not a private case, but common position, happening with everyone.

Subjectiveness is closely connected with the understanding of human reality. An old belief that we all live in a common world, equal to everyone, needs to be rethought. Objective world, suggesting only one verity, to which a man is close while bridling his subjectiveness- is a model does only for scientific research and pragmatic conscience manipulation and even then to a narrow limit.

V.I. Vernadsky called science and philosophy fields of personality, and in virtue of his untraditional view upon these appearances it becomes clear that scientific research is overlaid by human subjectiveness and come into zone of causality, coming from the man itself. People are as if settled in these spheres of activity, with all their aims, hopes and preferences. It is impossible to sterilize the participants of these and other forms of activity from their subjective-life orientations. That´s why it is more important t o learn principles of their existence and take them into consideration in all programs of education and communication. That allows to fall outside the limits of objective world as enough in our aim to understand a man.

The work is presented for International Scientific Conference "Fundamental and applied research. Education, economics and law", Italy (Rome, Florence), September 6-13, 2009. Came to the editorial office on 10.07.2009.