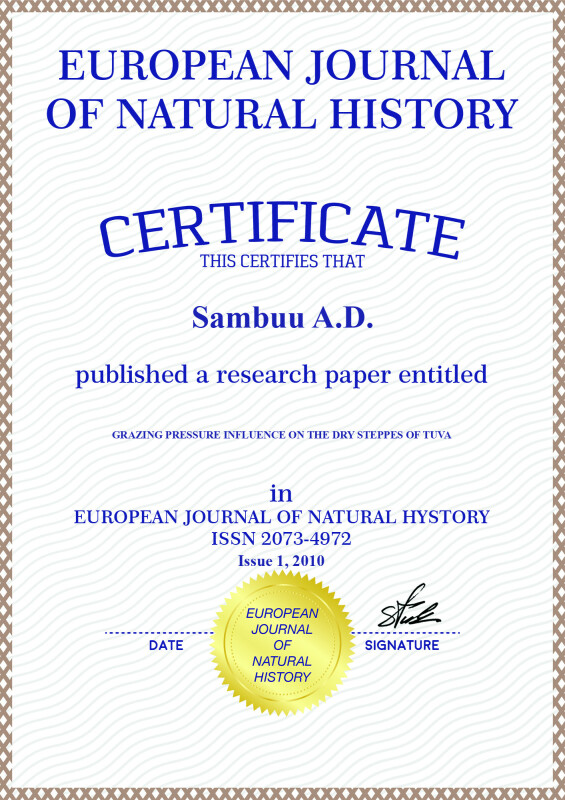 GRAZING PRESSURE INFLUENCE ON THE DRY STEPPES OF TUVA

In this study we were particularly interested in comparing some phytomass properties of different intensities of grazing impact of Tuva dry steppe vegetation.

In Tuva winter pastures were supplied with pump-houses to provide a livestock with water. After collective farm disruption these pump-houses were demolished and pastures were left without water. Many winter pastures were abandoned and herdsman have driven their flocks into river valleys. Many summer pastures transformed into full year ones with heavy grazing impact. Change of stocking rate leads to degradational or restrational succession which can be observed and investigated then and there.

The object of this paper is to describe a degradation and regeneration of grazed steppes as well as a balanced pasture with sustained use. The results obtained in Tuva steppes will allow to establish trends of change in major pools of plant material under different grazing impact. We will attempt also to provide some grounding for evaluation the resistance, i.e. a tendency of a system under impact to remain near to an equilibrium point and the resilience, i.e. the rate of an ecosystem return to the starting point after disturbance, in Central Asia steppe ecosystems (Begon et al., 1986).

The study was carried out between 1996 and 2009 in geographical regions of Central Asia, in the Uvsu-nur depression of Tuva. This depression is located in the southern part of Tuva on the boundary with Mongolia. In Tuva were investigated dry steppes with different grazing impact.

Annual precipitation in Tuva steppes varies from 150 to 170 mm. The seasonal distribution of precipitation is rather constant: 70 - 80% of the annual total falls during the warm half of the year. The yearly mean temperature at Erzin is -4,5°C. The coldest month is January with a mean temperature of -33°C. July is the warmest month with 22,0°C. The growing season, i.e. the period over which the daily mean temperature remains above +10o, lasts 130 - 140 days and the period with temperature above 0°C - 180 - 190 days (Experiment Uvsu-Nur, 1995). The steppes of Uvsu-nur depression belong to the ultracontinental grassland type.

Erzin overgrazed steppe represents the full year pasture with heavy grazing at present. Moderately grazed Onchaalan steppe is winter pasture over long time Jamaalyg steppe was initially moderately grazed by sheep during winter. Now it is summer pasture with light grazing. Choogey steppe was in the past heavily grazed summer pasture. Since 1995 grazing decreased and now this ecosystem represents a stage of recovery succession.

At each site an area of 100 m x 50 m was marked, within which the species composition was recorded in July in each of ten 10 m x 10 m square. For other measurements a series of ten 50 cm x 50 cm square was located at random for each sampling occasion. The vegetation was clipped at the soil surface and the litter was collected. The above-ground plants biomass was sorted into green biomass per species and total standing dead biomass. Litter and lichens, if present, were washed on a sieve to remove soil particles.

Soil monoliths with a surface area of 100 cm2 and a depth of 10 cm were collected in each square to a depth of 20 cm. The monoliths were washed and the plant material collected on a 0,25 mm sieve. All above-ground and below-ground plant biomass was dried for 24 h at 80 °C and weighed. Below-ground plant material was sieved to separate the fraction with the length > 2 cm. The samples were taken in may, July and September.

Above-ground phytomass in dry steppe is dominated by a few species of perennial grasses and subshrubs. Both the dominants and co-dominants of dry steppes are spatially and temporally dynamic. The variation in dominance structure is most obvious in grassland ecosystem with different grazing pressure. The overgrazed steppe had only two dominants - Artemisia frigida and Cleistogenes squarrosa (Table 1). In the constantly moderately grazed steppe (Onchaalan) there were five dominants among which usual dominant of dry steppes - Stipa krylovii had the greatest contribution (% value). In steppe recovering after heavy grazing for one year four dominants were recorded. Abundance of Cleistogenes squarrosa which is typical for overgrazed steppe remained high. At the same time the contribution of Agropyron cristatum increased. This change in dominant structure is indicative of the recovery process. In steppe restoring for four years a dominant structure change is still in progress. The contribution of Stipa krylovii and Agropyron cristatum increased while % value of Artemisia frigida and Cleistogenes squarrosa decreased. The shift in dominance structure is regulated by the growth and death of plants which have a different resistance to grazing and trampling. Dominance structure is important indicator of pastoral succession.

Above- and below ground reserves of plant material

Dynamics of reserves of plant material different components was investigated in the moderately grazed winter pasture during three years and in overgrazed and in recovering pastures during one season in 1998 (Table 2).

There was no significant difference in the Gmax value among overgrazed, moderately grazed and lightly grazed for one year pastures but there was marked difference between these pastures and the pasture recovering for five years. In the latter the maximal green phytomass value was highest. The amount of graminoid biomass decreased with increasing grazing intensity but the opposite tendency is found for the herbs + semishrubs.

The values for above-ground dead biomass were similar for MG, LG-1 and LG - 5 and much lower for OG - pasture, both regarding standing dead and litter. Standing crop of above-ground phytomass (Gmax + D + L) was roughly the same (295 - 340 g/m2) in the recovering and moderately grazed pastures, despite the fact that quantitative species composition was different. In contrast, the overgrazed community had much less standing crop: 158 g/m2 with 60% dead.

The different value of standing crop of below-ground living and dead biomass may be connected with as different grazing impact as well as with seasonal and year --to - year dynamics of below-ground biomass. Below-ground dynamics is regulated by the growth and death of root and rhizomes of different species. The active growth of different organs of plants may occur at different time of the season and vary from year to year (Titlyanova et al., 1999).

The regularity in dead mass dynamics was expressed not so clearly. The minimum of V differed from the maximum by a factor 1.3 - 2.2. The mean annual value of V was 1390 g/m2, i. e. twice as much as the B value.

Seasonal dynamics of below-ground biomass in steppes with different grazing regime in 1998 was pronounced. In overgrazed steppe B standing crop increased from May up to September while in steppe recovering for one year living biomass decreased during the whole season. The maximal standing crop in the pasture recovering for four years occurred in September after the minimal B- value reached in July. Hence the growth curves for B were different in steppes with different grazing regime. The same is true for V- standing crop dynamics.

Changes in the biomass structure of grasslands under different grazing intensity can be expressed as ratios. With increasing grazing impact entering of the vegetable leavings to the soil and the storage of the humus, carbon decrease. Results for the moderately grazed site did not agree entirely with those obtained from dry steppes. The below-ground biomass values were highest at the moderately grazed site although differences with the overgrazed site were not significant.