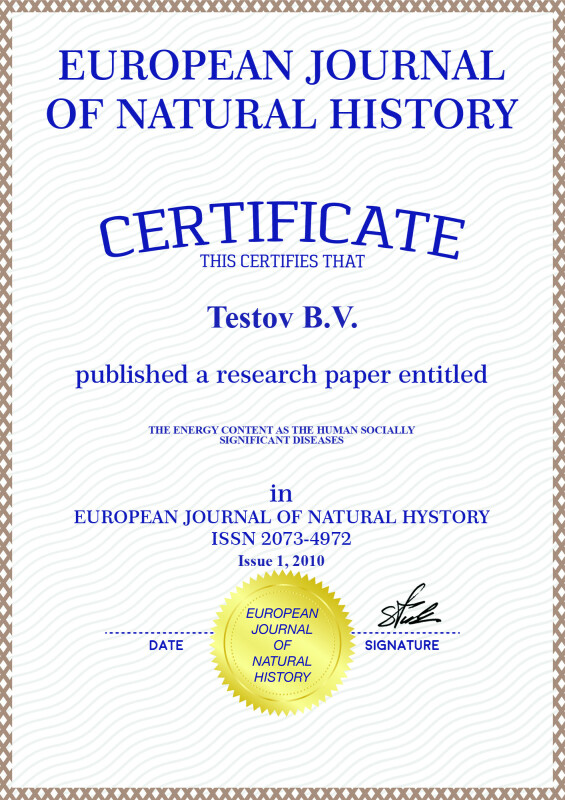 THE ENERGY CONTENT AS THE HUMAN SOCIALLY SIGNIFICANT DISEASES

So, it is quite well - known, that all these warm - blooded animals energetics is being defined by the metabolic processes intensity in the human organism, and it is quite possible to be calculated by the oxygen to be consumed amount. It is quite actually and the real one, the oxygen consumption intensity is constantly being increased, at the following load rise upon the human organism. However, the carried out numerous observations have been shown, that the different and the various people are being consumed the different and the diverse oxygen amount, at one and the same kind of the work fulfilment. So, the trained sportsmen and the athletes are running the short distance, quite almost not having changed their respiration intensity, though the respiration intensity is sharply being increased at the non - trained man. For all this, the both ones are making one and the same and also the equal kind of the work, having consumed the equal quantity of the energy. Consequently, the sportsman and the athlete much more actively is being included the additional source of his energy - «the energy content», which the man is being used at the rate of his loading. Thus, this content one is being formed also at the expense of the oxygen consumption, but it is being formed much earlier, and, therefore, it is quite possible to be taken into account only at the energy supply balance calculation for the much prolonged period of time (e.g. during the 24 hours).

The energy content is usually being created in the animal´s (e.g. man´s) organism, mainly, during the state of his sleep, when the blood circulation just, as in the human brain, well as in the muscles is gradually being lowered. The human organism is being created the energy content, which is being consumed by the cells in the fission process, as the large physical, well as the mental loads during the 8 hours, at the expense of the energy supply decrease just into these human organs. The energy content quantity is being defined by the energy need, having consumed in the interval of the time between the prolonged rest periods (e.g. for the man organism - during the 24 hours). The children, the organism of which is being consumed the energy much more intensively, than at the adult people; they usually sleep much more frequently. Thus, the actively functioning animals´ organism has the two sources of the energy. The first source of the energy - is the circulatory system, which is being supplied the nutrients and the oxygen, having entered into the human organism at the respiration, to the cells together with the flow of the blood. The second source of the energy - is the lymphatic system, by which the energy content, in the form of the lymphocytes, having contained the ATP (the adenosine triphosphate), is being supplied to the cells.

If the depressive reaction state is quite character and the typical for the children just from the excess energy, then the adult people much frequently are suffering from the energy content insufficiency. The large energy content is being created in the young human organism, as the growing human organism must to be provided the dividing cells by the energy. Just after the 240 months or the 20 years passing, when the man´s human organism has been stopped to be grown up, the demand in the energy is gradually being lowered, and step by step the human organism is being lowered the stored energy quantity. So, the prolonged sleeping necessity is gradually being lowered with the age at the man, and the insomnia is often being developed just in the old age. So, the sleeplessness is being resulted in the energy content further lowering, that it is being resulted in the cells´ regenerative capability further lowering, and also, moreover, in the human organism ageing. Thus, the different and the various traumas are being cured much slower; the man´s human organism and the animals´ recovery process is usually being proceeded in much worse in the old ages. The stability to the different diseases and the various illnesses is constantly being lowered at the man. Thus, it is quite well - known to everybody, that the temperature is being increased, when the man is having caught the disease; the febrile states are usually being appeared at the man´s disease and his illness. The temperature rise - is the human organism protective reaction from the infection. The temperature rise - is being brought to the infection death, and the human organism following recovery. The temperature rise - is being observed very seldom, at the elderly and the senior people´s diseases and their illnesses, and the diseases and their illnesses are usually being proceeded in much longer. Thus, the old ageing prophylaxis and the preventive measures are the elderly and the senior man´s human organism high level motor activity, which are quite necessary for the successful struggle against the insomnia and the sleeplessness, the large energy content accumulation, and the elderly and the senior man´s human organism life security increase.

The work was submitted to the International Scientific Conference «Diagnostics, therapy, prevention of socially significant diseases rights». Turkey (Antalya), August 16-23, 2009. Came to the editorial office on 01.07.2009.