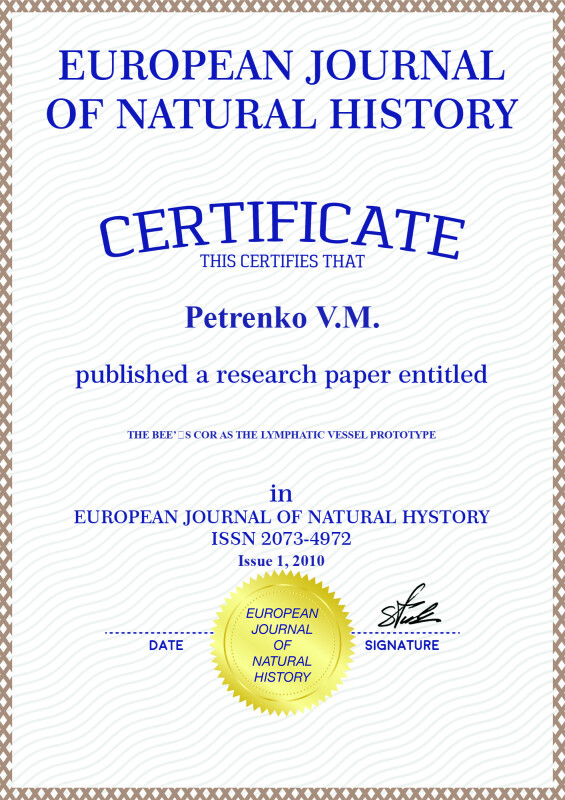 THE BEE’S COR AS THE LYMPHATIC VESSEL PROTOTYPE

Article in PDF
41 KB
The bee´s cor - is the caudad closed polysegmental tube with the cross - striated muscles and with the compound axial valves. Their double valvae are being formed by the cor lateral finger - holes valves at the proximal convergence. The lateral valves couple distal valvae are being formed the caudal segment exit valve, and their proximal valvae - the cranial segment entrance valve. The double valvae intercuspidated canals of the bisegments border valve (e.g. the lateral finger - holes coupled valves) are being opened onto the proximal segment. The valves, having settled in such way, are being regulated the hemolymph axial current between the cor´s segments and the interorgan liquid lateral inflow onto the cor from the body cavity with the coelomic epithelium lining retinens rostralis - of the strongly dilatated equicapillary bed: the venous bed reduction is being taken its place at the insects, in comparison with the annelids and the other arthropoda. The cor´s valvate apparatus and the body cavity are being supplied it. So, the blood is being carried only the nutritive and the biologically active matters, the trachea and also its branches themselves are being delivered the oxygen to the organs. Therefore, the insects´ cor is quite able to be served the first evolutional model of the active lymph drainage from the organs, which is much earlier and the nearer to the mammals´ lymphatic vessels, than the amphibians´ monosegmental lymphatic cor - their intervalvate segment prototype, that is the lymphangion, by L. Ranvier (1875).

The work was submitted to international scientific conference «Prospects for the development of university science», Dagomys (Sochi), September 21-24, 2009. Came to the editorial office on 11.07.2009.