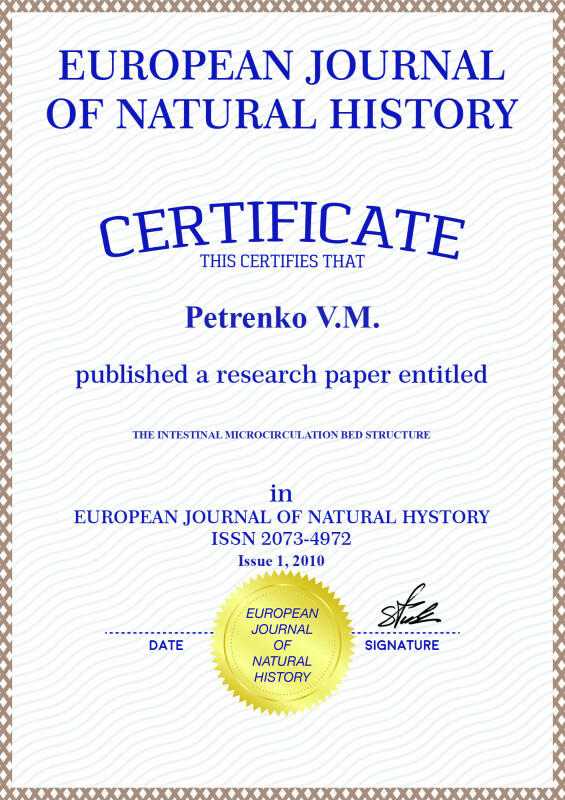 Article in PDF
73 KB
The small intestine vascular bed has its multilayer structure. The microcirculatory bed (MCB) linear interfascicular segments of the flat mesentery are being transformed into the entodermal canal circulatory segments: the subsero - muscular segment contours - the external (e.g. the mesenteric arcus and the vascular plexuses) and the internal ones (e.g. their submucosal plexus), and the last one - and this is the mucosal plexus MCB external contour. The MCB mesenteries have the mainline network type, so the MCB muscular layer and the mucous membrane are being acquired the deciduocellular structure: in the habitat of the muscular layers, the simple micro - regions contour networks are being compressed in the arterioles and the venules basal plexuses, the modules are being forced out from their ansae (e.g. into the villi and the muscular layers), and they are being merged into the complex micro - regions - that is, the basal plexuses raisings. The intermuscular plexus is being formed by the small arteries branchings, as the straight (e.g. from the mesenteric arcus), well as the recurrent ones (e.g. from the submucosal plexus), having accompanied their small veins and the lymphatic capillaries by the inflows, the mucosal basal plexus - by the submucosal plexus branches and the inflows. The vessels and their plexuses are being complicated the MCB architectonics, by means of the thickening on the polymorphous basal plexuses and on the microvessels networks, especially in the submucosal basis and on the thin intestine mesenteric edge. The mucous membrane circular folds, the intestinal crypts, and the duodenal glands, the lymphoid nodes and the patches, the plexuses nervosus are also being deformed the MCB.

The work was submitted to international scientific conference «Prospects for the development of university science», Dagomys (Sochi), September 21-24, 2009. Came to the editorial office on 11.07.2009.