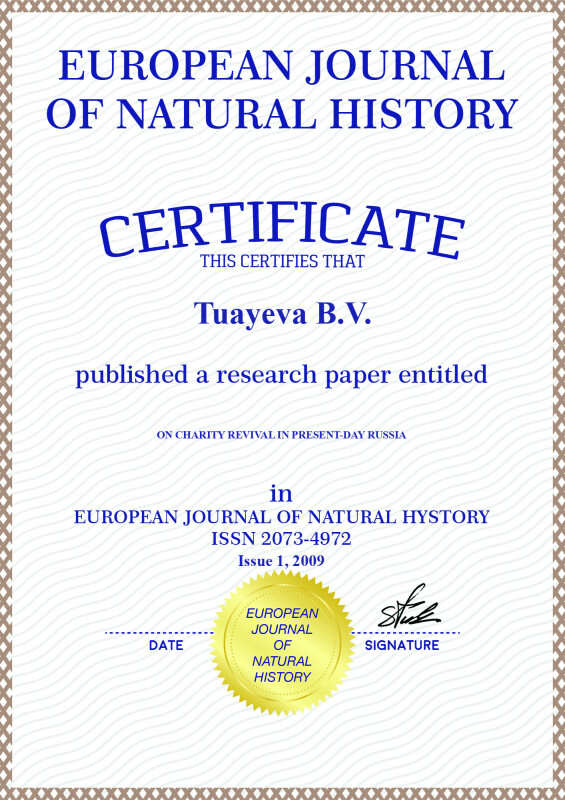 ON CHARITY REVIVAL IN PRESENT-DAY RUSSIA

Charity, as the fundamental principle of present-day forms of social care has an important civilizing meaning - the provision of social equilibrium in the society, and appears, first of all, as the form of self-defence and mutual aid when official powers due to various reasons is not able to solve the problems of the needy.

The charity work in Russia has historical roots, which are connected with the becoming and development of the national identity. At different stages of Russian history the motivation, kinds, methods and degree of social assistance rendering were various. The problems, which non-state voluntary organizations and societies were trying to solve, remained unchanged: they are the "relief" to the needy, custody of the poor, widowed and orphans, moral and financial assistance for the quickest adaptation in conditions of socioeconomic and political reforms, etc.

The role of charity and private initiative grew and is growing again in the state, where insufficient financial assets are provided for social needs, where there is no economic security and the unemployment level is too high (especially in the youth media). Nowadays, the process of transformation of the Russian society is attended by the government and citizens´ role alteration and civic initiatives growth. The national social safety net is still unable to solve the set of current and emerging problems. Beyond the administrative-governmental institutions of social protection there arise new philanthropic initiatives, which are aimed at the solution of the social safety problems. As a rule, they are the activity of various voluntary non-state organizations, charity funds and societies.

The present-day charity revival has become a response to the formed socioeconomic situation, which was characterized not only by a considerable impoverishment of a quantity of the population, but also by the government potential weakening. In the Russian society the need to search ways out of the socioeconomic crisis, ways of the social tension remission, and not only by state organs, but also social ones, solving the problem of social assistance for the population, has become actual. The way out of the present-day crisis is seen in the development of charity models maximally conforming to the specificity and traditions of Russian culture and history, taking into account the polyethnicity and polycofessionalism of the society.

The revival and development of charity work should be attended by the National and legal protection. The charity programs and actions will become effective, if they have clear priorities, concentrate on the solution of certain problems, having address character. The virtue of charity is in its mobility, the quickness of response, the variety of aid forms and its individualization. The separation of rights and duties of the state, society and private persons, their interaction and consolidation in the area of social assistance will, certainly, become the most important condition of its efficiency.

Nowadays, various charity funds and organizations called to compliment the efforts of the state in the social and cultural spheres are created in the country. The earlier unclaimed historical experience of the pre-Revolutionary charities´, Leagues´ and Committees´ functioning is especially important for them. In this relation the topicality of historical cognition of charity development in Russia are acquiring a close connection with the formation of the governmental social policy. In connection with the fact that a rich pre-Revolutionary experience of charity was practically lost during the Soviet period of the Russian national identity; the topicality of reconstruction of charity traditions of the past is substantiated by the following tasks: the appearance of practical necessity in support of the needy in the context of the carried out socioeconomic reforms; finding out the problems of development and realization of such social policy, which is able to provide people´s life quality growth; the appearance of new reference points of the civil culture, wherein the social support of unprotected layers would take a special place. When studying Russian charity history, its regional aspect, on the one hand, allows imaging the sizes and forms of charity work in the scales of the whole country, and, on the other hand - revealing its special features, which are conditioned by the economic and social development of the region, demographic, national, religious, mental peculiarities of the local population.

The search of a new strategy of the social development faces the problem of compatibility of traditional values and the ethics of new market relations. The charity revival in present-day Russia makes scientific knowledge and theoretical comprehension of the richest experience of social charity actual. The problem attracts attention of historians, sociologists, psychologists, culturologists and other experts, who raise the problem of the formation of a new scientific direction connected with the interdisciplinary studying of the past and present of charity - its historical traditions, modern forms and development prospects.