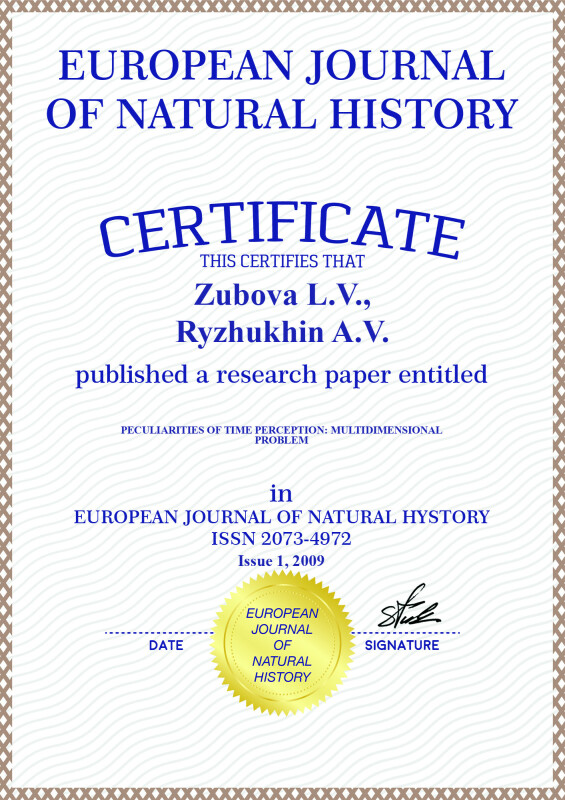 The problem of subjective time is being developed from different perspectives by many sciences, both natural (Dobrokhotova, Bragina, 1977; Megrabyan, 1972, and others) and humanitarian ones [Elkin, 1962, 1969; Woodrow, 1963, and others]. In psychology the influence of various factors, such as motivation (Budiyansky, 1984), on time perception is being studied, the shots to define the duration of "present" (Molchanov, 1998; Golovakha, Kronik, 1999) are being tried, etc. The problems of subjective time are studied by general and experimental psychology (Rubinstein, 2006; Golovakha, Kronik, 2008), psychophysics (Kahneman, Treisman, Gibbs, 1992; Falikman, Pechenkova, 2001), engineering psychology (Mitina, 1979; Strelkov, 1999), differential psychology (Lisenkova, 1981). And in developmental psychology the fact that the time imagery formation in children is a "necessary precondition of cause-effect and theoretical ideation development, and also the condition providing cognitive activity as a whole" (Andriyevskaya, 1980) is marked out specially. According to Kuznetsov O.N. and his collegues the adequacy of time reflection is necessary for a successful adaptation of a human to the conditions of changing surroundings. However, in spite of the recognition of an important role of subjective perception of time in the comprehension of personality characteristics and great amount of works devoted to this topic the problem cannot be considered a sufficiently developed one.

So, for example, R. Woodrow describes the problem of time perception as a "difficult one to study" (Woodrow, 1963) and points to a frequent inconsistency of results of various works on the given problem. So, many authors show that people underestimate the time for complex tasks execution on the results of some studies, and vice versa - overestimate it on the results of other ones (Rogovin, Karpova, 1985; Kalyagin, 2006).

Besides, when studying time as a psychological phenomenon, investigators use the most diverse terms, among which one can see "time perception", "time reflection", "internal sense", "sense of time", "time imagery", "time judgement", "time memory", "organization of behaviour and activity in time", "time knowledge", "experience of time", "time realization", etc. Some research workers dedicate their papers to the find out if these notions are identical. As a rule, they come to the conclusion that authors have different sense in them and mean the phenomena irreconcilable with each other (Dobrokhotova, Bragina, 1977). And it raises difficulties to the comparison of various investigations´ results.

The study of subjective time caused the appearance of conforming tests, wherein a range of operationalized notions, such as, for example, "the definition of time duration" (or "time estimation"), "time measuring", "time reproduction", is used. Let us settle upon them in more detail.

Measuring preset time intervals (1 min, 30 sec, 10 sec, 7 sec is used most often). The experimentalist calls a time interval, which the test person should measure, i.e. specify, when the desired time passes out. The investigator records the time with the help of a stop watch, taking into account the time frame duration accuracy level, and also the frequency and importance of its under- and overestimations.

Verbal estimation of time intervals. Various time intervals are set by a stop watch click or any other method, the test person evaluates their duration verbally.

According to the literary data the estimation of the intervals and their measuring are in converse relations, i.e. the persons, who overestimate the preset time intervals, submeasure them, and vice versa (Mitina, 1977; Lisenkova, 1981, Rogovin, Karpova, 1985).

Time frame reproduction. The test person is offered to reproduce (repeat) an earlier presented interval by means of knocking or any other method. It is considered that a departure from the reference time is connected with the nervous and physiological function of a human, it is an innate characteristic and doesn´t change for the whole life period (Elkin, 1962; Tsukanov, 1990).

To study the subject perception of time intervals other methods are also used, the test of Frankenheuser (Kuznetsov and others, 1985), for example, the estimation of a simple sensomotor reaction duration (Mikhailova, 2008), the estimation of accuracy of the reaction to a moving object - RMO (Tochilov, 1970; Mikhailova, 2008), etc. So, one of the early discoveries made when investigating the problem of subjective time in psychology was the detection of a tendency of the test persons either to over- or underestimate time lines, that is referred to their individual features connected with their somatic and nervous function (Lisenkova, 1981). Another subjective time investigation test group is aimed at the measurement of time characteristics within the "fast-slow" diapason. These methods appeal, as a rule, to visual imagery of time ideas. Such methods as pictograms, for example, are used here: the test persons are offered to draw pictures denoting the ideas of "fast" and "slow". A social-perceptual intuitive test (SPIT) (Burlachuk, Morozov, 1999), the stimulating material of which the L. Sondy test pictures serve (Sobchik, 2007): the test person is offered to estimate the time of behavioral reactions of the people in the pictures judging on their faces´ expression.

And, finally, an impressive part of the methods is aimed at the detection of peculiarities of temporal relations reflection by the human in the context of life journey and biography. The methods of simple graphical tests, such as "Time circles" by T. Cottle (Cottle, 1976), together with such time taking autobiographical methods as "Life line" (Golovakha, Kronik, 1993), ZTPI (Zimbardo, 1999) known in Russia as "F. Zimbardo´s method on time perspective" and "psychological autobiography" (Burlachuk, Korzhova, 1998), can be referred here.

In the Cottle´s graphical test described in the works of A. Kronik and Ye. Golovakha the test person should depict his past, present and future as three circles, the importance and interrelations of these elements are analyzed after that. The questionnaire of F. Zimbardo on time perspective (Zimbardo Time Perspective Inventory) adapted by A. Syrtsova defines the preference of this or that time orientation by the respondents with the help of five factors (Syrtsova and others, 2007).

To study the subjective experience of time in the life scale the "test of semantic associative relations", where the test person is offered to name the associations connected with the ideas of the "present", "past" and "future" (Kuznetsov and others, 1985), is used; the test of semantic differential (the estimation of the present, past and future with the help of specially constructed scales) (Fyodorova, 1978) and other methods allowing evaluating individual differences and experiences of time aspects of the reality are used as well.

Taking into account all the diversity of methods and approaches to the study of subjective time it becomes clear why so different terms are used in the given case. It is evident that to describe the results obtained with the help of various methods and the phenomena found out different notions, which differ from each other qualitatively, are attracted.

Lately psychologists agree that there is no special autonomous mechanism of time accommodation in the human psyche more and more often. We share the opinion of M.S. Rogovin and Ye.V. Karpova, according to which "all the mental mechanisms and processes available in the human are used for this purpose; the same levels of psychic reflection and their operating means, which have been formed evolutionary for the solution of any other accommodation problem, are attracted..." (Rogovin, Karpova, 1984). For, even though physical time can be measured, it is not a stimulus in the usual sense of the word: there is no object, which could have an effect on the receptors of the human perceiving it immediately. That is why the notions of "feeling" and "sense" of time are used when we refer to short time intervals; by the problem amplification and attraction of more protracted time scales the involvement of more complex mental processes and use of the notions conforming to them, such as "realization", "experience" and "judging", is required.

After B.G. Meshcheryakov and V.P. Zinchenko the copy editors of the "Big psychological dictionary" we mean an imagery reflection of such characteristics of real events as duration, course rate and progression by the term of "time perception". We also agree with D.G. Elkin, who showed in his multiyear research that a gradual assimilation of social duration etalons making the system of time lines and scales takes place in the human over the period of his cultural development (Elkin, 1962). It supposes that only upon the condition of all psychic functions maturity an adequate reflection of various time relations is achieved, it playing a great role in different kinds of practical human activity.

In general, when working further in the time perception problem, it becomes apparent that it is extremely complex and studied insufficiently enough, but at the same time the psychological theory and practice demands impose the necessity of its further development. Maybe, it is an integral research of various time perception aspects that will allow connecting the level of different time relations reflection adequacy development with personality characteristics and mental processes.