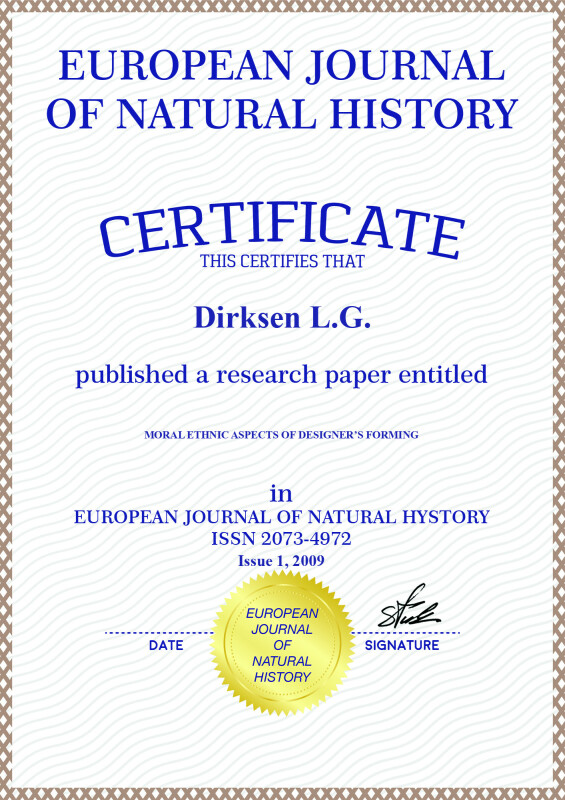 In each country of the world association there is a specific role in solving the problem of the stable development, which is common to all mankind and is reflected on the national strategy, in accordance with its potential and peculiarities. This is on the question of principle of these strategies to take into account a factor, that for the next generations a priority will be not over-usage of the material good and possession of wealth as an indicator of dignity and rate of the social meaning of man. When satisfying you own material requirements at the most necessary rate such indicators should be intellectual and testament perfection of man, making of the material basis and conditions of the informative analytical, mental cognitive and testament aesthetic development.

Meaning that the paper of the president of the Republic of Kazakhstan N.A. Nazarbaev "In a stream of history"[1] is an important and poly-semantic event in science and cultural life of all the central Asian people. This culturological research in accordance of its content and many methodological aspects discloses a new solving of the problem of over-interpreting and deeper historic learning. A language, memory and culture are an important trilogy of the national mentality and have their over-interpreting in the article.

A term "culture" is of the Latin origin. At first it meant "soil cultivating". Susumo Sato and Khiromitsu Kumamoto in their book "Reengineering of environment" wrote the following: the things made by a man in the agriculture lead to the appearance and affirmation of cyclical interconnection with nature. From the point of view the agriculture can be named as the second nature. It supposed a constant and dynamic interconnection a man and environment. The rural landscapes are enrolled to the nature. As a rule, agriculture is more stable, independent and less aggressive. Contemporary agriculture based on the using of HT is not stable and destructive. It will disappear soon. And only organic agriculture of the ancient times and middle ages can be stable and reliable".

Ancient people went in the direction of the cultural world, when they begin perceiving the nature as an external dependent on them world. According to Portman[2], the animals are closely connected to the nature and can´t influence the changes of the environment actively. This leads to the following: the animals and nature are indivisible. Man began dividing from the nature, vice versa. Trying to bend it to his will, he confirmed his independence. Such division lead to the following: a man turned out from the nature being to the cultural one. In the result of this the cultural aspects appeared in his life. An attribute "cultural" became a synonym of the notion "artificial", "made by man". The culture captured the human being forever. In general meaning the culture is understood as all the kinds of transformation activity of man and society and also its results.

From this it follows that the culture is an important characteristics of the social life. That is why it can´t be divided from the man as a social being. From the biological point of view a man has just an organism, which has a certain structure, advances and functions. In the process of vital activity a man forms as a cultural historic being. His human characteristics are the result of assimilation of the language, introducing him to the existing in the society value, traditions, learning of the techniques and activity skills, which are common to this culture, etc. The degree of cultural development demonstrates the achievements of the certain historical civilization and indicates it´s place of existed, contemporary and future civilization.

Slowness of the requirements of the Kazakh steppe habitants is the following: mental cognitive and testament aesthetic development needs clear sources to give knowledge to students-designers and for the creative implementation of knowledge in the activity.

Such a requirement of the creative implementation concerns first of all a design-process which consists not only in the consumer´s requirements of the national design, but in the designers´ ones of learning the sources of the Kazakh culture. The specialists of our Republic take part in this process, understanding that a design isn´t limited by using this or that style. It is indivisibly connected with the development of new technologies and competition of the goods at the market. It should correspond to the place and time, putting charm into the life, make it comfort and pleasant. At present time the Kazakh design is avanguard and very susceptible to the global vibrations of stylistic concepts. One of the tasks of it is a creation of "today and here" cultural context. As a rule, going into the past as a fact of the real life, a steppe culture became an indivisible part of the national mentality. A phenomenon of "the regional style" almost closed up with "nostalgia of tradition", search of national originality, attempts of connections, "time´s connections".

That is why the interest of designers and architects to the culture of steppe nation rises not accidentally. First of all, the parameters and characteristics of this culture are related to the qualities inherent to the design product. Secondly, all the subjects of nomad encampment were selected distinctively during the centuries and perfected from the point of view of their maximal practicability, solidity, firmness, lightness and convenience under the condition of constant changes of placement. These characteristics are very important for the designers´ projects. Thirdly, the pieces of art of steppe nations drag up with their force, primordial purity and unusual rhythmic, for the first sight. Thy cast a spell by the perfect quality of the hand-made work and the quantity of spent energy. Our forbears hang on their necks a little skin rack with a pinch of dried-up wormwood for happiness when going faraway. Who are our forbears?

The researches of the Kazakh people were Turkic-speaking tribes, which had a nomadic style of life. The nomadic habits, home management forming for ages, ancient heatlon ceremonies, elements of shamanism formed a traditionally social culture of national communication, in the content of which a wisdom is reflected. "Adam bol" is a principle of Abai´s philosophy has an important meaning even for today for the moral ethnical education of the youth. It calls to self-development, self-knowledge and self-cleansing. Shakarim´s philosophy consists in knowledge of 3c truths: truth of Belief, truth of Science, truth of Soul-Conscience. It can be regarded as a methodological basic of testament moral education of the rising generation [3].

The following factors influence the moral norms (according to A. Kalybekova):

- connections of each with micro- and macro-sphere of socialization: family, clan, village, city;

- factors of a religious character, their sources are shamanism;

- the contact with other nations: Russian, Mongolian? Kirghiz? Buryat...

Each center and every nation had their own face in the history. It is recognizable. The ancient artists kept the traces of the past. Their art is an object of the search of contemporary science. Coming-to-be of the nation is very long process. This is a real historic phenomenon depending on many reasons. "The traces of ancient people, as it is known, were found in Central Africa and Indo-China. There were 2 centers of the civilization origin. It seems that from this it follows that 2 human races, i.e. Negro and Mongolian. Murad Adgy mentioned in his book "Europe, Turks, Great Steppe" the following: the civilization development lead to the division of people" into the nations. For the first it was connected only with a nature and environment. For instance, the habitants of mountains developed their psychology for ages, their disposition, which differ the ones of coast habitants. And the forest habitants had another culture and disposition. The face of each nation formed for ages; its individuality polished. That is why to draw the nation portrait you need tens of lines, hundreds of color tones" [4].

The archeological data showed that the main part of the territory of Kazakhstan in VII-IV century BC was occupied by the powerful tribe of Saki. Saki occupied the territory of South, East and Central Kazakhstan. Apart of them, there were many others big and small tribes. They also took part in socio-political and cultural events of those times. However, the territory of occupation and certain history of the majority of them are not clear. The written reports are fragmentary and of general character; the archeological material is small.

Lets regard some of them. Archeologist, Professor S.I. Rudenko named nation of Altay Scythian in his books [5]. The first of the European, who informed about Scythian was a Greek writer Gerodot. The texts are composed in accordance with Persian tsar Dariy and Xerks are the written report of our interest. "The most important tribes live on the Evksinsky Ponte, i.e. the place which Daruy visited. In this there is no educated tribe at all. There is no any famous person, expert Scythian Anaharsis. Among all the famous nations only Scythians have the most important for human life art. This is the following: they don´t allow escaping to th enemy that attack their country. Nobody can overtake them, if they don´t allow this. But they don´t have cities, fortifications; they take their houses together. All of them are horse archers. They are busy at cattle-"breeding; their houses are kibitka" [6].

The key moment of the developing of nomad house was invention of the folding and collapsible on links´ frame of the vertical walls. Such constructive design should be regarded as the main in the process of creating classis type of jurta. In favor of this revolution change of the horse construction the actual living space was extended, the length was decreased and the general weight of wooden details too (thanks to the decreased cutting). And the main thing is appearing of the harmonized space for man.

Saki worshiped to the nature forces: sun, wind, thunder and storm, which were represented in the image of God. The Gods were undergone a transformation into the different animals and birds. Popularity of these images in mythology and folklore revived "wild animal style" in the art.

A topic basis of the art of wild animal style were kept from ancient times myths about the origin of people from different animals. An ancestor of clan usually appeared from any wild animal: deer, tiger, steppe eagle, etc. The things with an animal image regarded as holy , played a role of talismans and amulets. A wild animal on the weapon seemed to help in the strike, made it invulnerable and fearless.

This style appeared in the art as a regular expression of attitude of Saki´s tribe as an embodied their mythology in the fine art, as a special sign system for expression of nomad ideology. This style of art creativity in III-I century BC loosed a realistic basis, turned into the ornamental scheme. At the beginning of centuries a bright art of wild animal style disappear at all.

The task for students-designers is complicated by the necessity to understand the art of wild animal style and interpret such themes as ornamentation or using of traditional constructive, design underlying cause and semantics of regional culture. It is very important that we jumped over the stage of traditional ornaments and appealed to the essence of architecture, i.e. space and objects. However, in general we have the examples of using European architectures language without satiety by the local dialect. One can hope, that the sense of belonging to the world architect cognition and temperament of nomads can result amazingly, i.e. fresh, humane, architecture design lines, striving to the clearness and simplicity, and a gift if tradition.