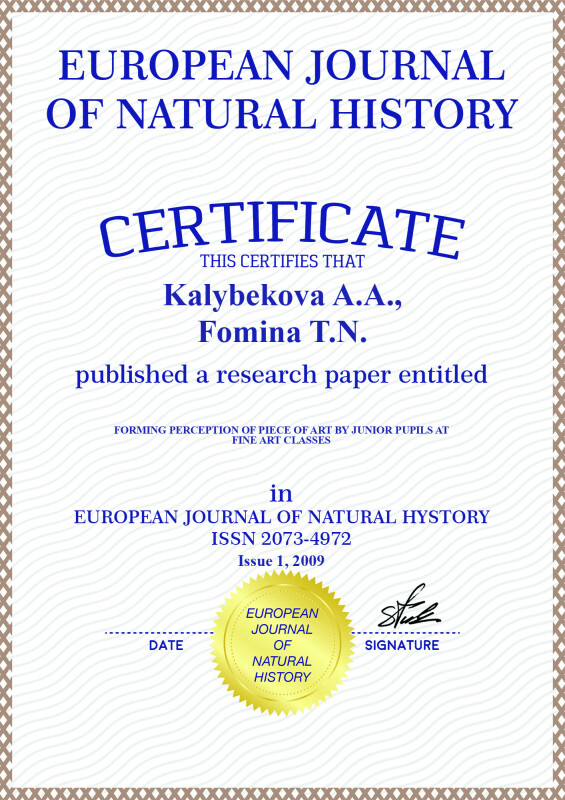 Psychologists regard artistic perception of a child as the result of his becoming a person. It is untutored. Not from the very beginning a child perceives a piece of art in capacity of such. In the first instance of the child´s development the following is typical: efficient, practical attitude to it (The children palm and touch an image of the picture, stroke it, etc.). In the opinion of some west psychologists, perception of beauty is innate, common to man biologically. Psychoanalysts colligate an artistic perception with a sexual instinct [1].

One can´t regard a picture perception of the children without its meaning content. L.S. Vygotskiy specified by an experimental approach, that the perception stages revealed by V. Stern, characterize not the development of picture perception, but the balance between perception and speech at the certain stages of development. A composition of piece of art and the degree of coincidence of meaning and structural picture´s center are very important for an artistic perception and understanding of an idea.

The perception of the piece of art is a complex mental process. It supposes a capability to inquire and understand a thing shown, but it is only a cognitive act. An important condition of artistic perception is an emotional side of the perceived and expression of the attitude to it (B.M. Teplov, P.M. Jacobson, A.V. Zaporozhets, etc.). A.V. Zaporozhets mentioned the following: "... an aesthetic perception doesn´t resolve into the passive affirmation of the familiar sides of reality, even though very important and essential. It demands that an apprehensive person somehow comes in the imaginary circumstances and takes a part in the actions in the mind´s eye" [2].

When perceiving any piece of art it is important not only to have general attitude to the whole piece of art, but the character of relationship and child´s value of the separated heroes.

During the development of an artistic perception of school children there is an understanding of the expressive means of piece of art, that leads to more adequate, full, deeper perception of it.

A sure-handed application of music and artistic word influence positively understanding of the picture by the junior pupils and help perceiving the word pictures embodied in them deeper. The interesting techniques develop emotional tenderness and observance awakes a taste.

It is important to form the children´s correct assessment of the heroes of piece of art. A conversation, especially by using the problematic questions can help very much. They lead a child to understanding the hidden before second true identity of the characters, motives of their behavior and independent overvalue of them (in case of initial inadequate value).

Perception of pieces of art by the school child will be deeper, if he learns to see elementary expressive means, used by the author to characterize shown reality (color, color combinations, shape, composition, etc.)

Development of the aesthetic perception happens in all kinds of the artistic and household activity of a child. Under the condition of an expert guidance of the elders it can gain a relatively higher level even at the age of school child. Due to the lessons learned the children at the age of 7 - 10 years learn the things and the whole pictures easily. The pupils steadily conceive ‘categorically´ even unknown mechanisms, plants, and signs, i.e. as representatives of some group: "It is a car", "It is a bush". A syncretistic of the school children is expressed more faint due to the intensifying attention to the relation of the components in the whole and aspiration to find the semantic connections when perceiving an object.

However it is easy to see in school child too some singularity of perception. It is brought on the mistakes in the cognition of the space in a great measure, though accuracy of distinction of the geometrical shapes and correct naming of them by the children over 7 years mount visibly in comparison to the preschool children (L.A. Shvarts, S.V. Muhin, M.N. Volokintina).The first grade pupils have a tendency of turning unknown shapes into the objects (O.I. Galkina, S.N. Shabalin). That is why the junior pupils name a cylinder as a glass, cone (inverted) is a top or roof, quadrangular prism is a column, etc. This means that there are some present troubles in the abstracting shape from the object.

The reason of the stability of many mistakes in perception and shapes´ differentiation is their constant situation of perception. Many of them recognize the straight line, if it takes a horizontal position, but if it is drawn vertically or obliquely, they don´t. The same happens with perception of triangular. If this word children associate only with triangular and only in its one position in the space (Let us say, the hypothesis is located in right and peak is over), all the other kinds of the same shape and even the same quadrangular triangular, place with down peak, isn´t associated with this group of geometrical shapes. Such limitations speak about the extant opacity of the pupils and indivisibility of their perception.

It is very important for graphical perception to compare 2 of the similar, but in some way different things. Such comparison allows emphasizing those distinctive features of the objects, which are typical for them (L.I. Rumyanntseva). The assimilation of dimension is very important for the development of graphical seeing when analyzing any piece of art. An acquaintance with meters and centimeters materializes the graphical features of the objects, and metrical work at the classes of maths, labor, nature study and physical training develop visual estimation, measuring the distance and size. A child learns separating graphical characteristics of the objects and their coexistence at the lessons of fine arts.

Giving peculiarities of the graphical peculiarities and connections, perfection of observation and understanding influence precisely the development of perceiving a narrative (including artistic) picture of school children.

In the result of special training the children begin perceiving not only the picture´s narration, but the compositional peculiarities and many expressive components. The pupils feel a sultry hot day at the harvest time or moist an foggy air on the lake. Such perception is a complex process of a constant development of an idea from the perception of the whole picture (synthesis) to its analysis, then again to the whole picture and to separating less and not noticed before details, which allow understanding the picture´s idea deeper. Selection of the name as the highest form of generalization is quite intelligible to the children at the age of 7-11 years and efficient way of teaching midchildren to parceling-out of the main at the picture.

In midchildhood a special kind of perception, i.e. listening, develops essentially. In the preschool childhood a child oriented to the instructions, requirement, and value of an elder on the basis of perception of his speech. With great relish he listened to the educator´s tale fairy tale. For a pupil listening becomes not only the mean, but a kind of his educational work. Besides, the children listen to the answers, decisions, explanations of their comrades with a critical tendency. Listening and reading become an original form of a brainwork of the children. Such brainwork demands not only division of the some words and understanding of the meaning each of them. Listening to the tale demands the connections between words in the sentence and between sentences, paragraphs, and, finally, units and chapters. As well as in the picture´s perception, the generalization of the whole content is given in the title of the tale and subtitles, given to each of its component, that guarantee deeper understanding of the whole text by the children.

The time perception is very important for development of the school child. In the end of the preschool age, there is a capability to take the position outside of imaginary, the position of spectator (N.D. Nikolenko,etc.)

In the process of developing artistic perception the value of the perceived arises. Special incomparable and the best educational force of the art is firstly in the fact that it gives the opportunity to come into the life, live through the period of life which is reflected in the light of certain ideology, said the greatest Soviet psychologists B.M. Teplov. And the most important is the following: in the process of this experience there are certain relations and moral appraisal, having incomparably big compulsory force, than the appraisals simply reported or teachable [3].

At first the appraisals, occurring in the result of the intrinsic activity of a man, are expressed in the preference of such thing that is liked. They progress together with an artistic perception and take form of the fine estimation of art from the point of view of aesthetic ideal.

Perception of the school child requires not only the readiness of analyzers, but also some experience: knowing things and perception skills. That is why perception forms during the period pf child´s development. The perception perfection can be separated from the general mental stature of a child.

Perception pf a school child of any object and its image are the reflection of the whole in the interrelation of its components. These relations of the whole and its components are changeable and flexible. Any process of perceiving the object as the whole requires the division of its peculiarities, sides, parts (analysis) and connections between them (synthesis). The cognitive work is demonstrated more distinctly in the perception of the complex meaning of the picture, perception of which requires understanding, i.e. it is a form of a complex cognitive work.

The process of developing passes 3 stages: listening, describing and explaining. These 3 stages testify the different degrees of understanding of a given content by a child. They depend on the following:

That is why a child can show simultaneously different levels of the picture´s perception. In other words, the levels can coexist.

The pupils can connect theoretic knowledge with practical activity. The children open up at random and sequent observe the surroundings, connect mentioned facts with data in life, received from the books and teacher´s explanations. Theoretical reasoning of the studied new material induces a pupil to check in practice again something discovered by him. The school children acquire tenable and reasonable knowledge. The perceptive culture is a perfection of the whole child´s cognitive activity [4].

The perceptive development is a transition form, a conjoint, syncretical, fragmentary perception of the object by the child to the divided and categorical reflection of things, events in their extensional, temporary, casual relations. When developing the perception its structure changes and mechanisms. The children´s eye follows the hand movements. A word is a mean of analysis and generalization of perceivable content.