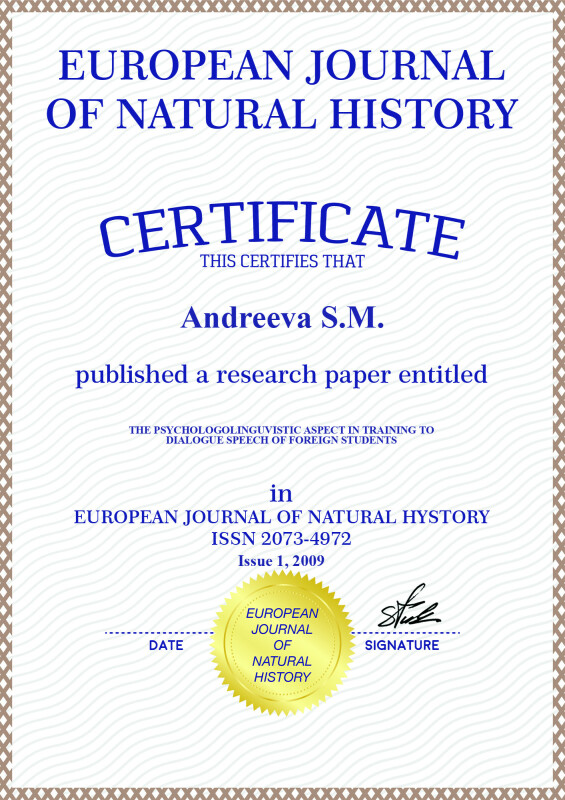 THE PSYCHOLOGOLINGUVISTIC ASPECT IN TRAINING TO DIALOGUE SPEECH OF FOREIGN STUDENTS

The adult person, including into educational activity, acts in a new role of the pupil. But this new role differs from his role carried out several years ago. The main thing is the changing of their motives of training because knowledge are considered by them as means of achievement of vital plans, the successes, the certain social status. The motivation of cognitive activity of the adult, its activity and purposefulness is defined by the personal importance of knowledge.

Hence, process of training of adult students has:

- to base on previous educational, linguistic, life experience;

- to form at students´ knowledge, skills, methods of educational activity;

- to open sense of educational activity of each grade level;

- to develop professional qualities of the person of the future teachers-specialists in Russian philology (speech, pedagogical, etc.).

In our opinion, working with adult pupils it is necessary to consider:

It is necessary to note that the position of the adults in relation to educational activity is a position of the person actively making the decision in conformity with the internal values, motives, belief which have been generated during previous activity - educational or labor (Ananiev B.G., Bozhovich L.I., T.K.Donskaja, I.B.Ignatova, Kuljutkin J.N. etc).

The efficiency of educational activity depends not only on cleanly psychological factors, but also from character of a material so its form represents some language which it´s used for transfer to the information [7:186-187].

The transformation of the received information occurs in thinking and is made at a verbally-logic level by means of language, signs and symbols. On the basis of this B.G. Ananiev has allocated three kinds of thinking:

1) subject which is made with the actions expressioning the ideas;

2) evidently-shaped (which is made with search of natural communications on an evident material);

3) verbally-logic which bases on a verbal material [1].

It is necessary also to consider psychological features of perception, fixing and preserving the information. Reflective, identifying and modeling functions of a brain help to check the information in system of an available knowledge.

The training adult foreign students to communicative culture represents a uniform process of formation of system of knowledge, communicative skills and skills which are formed and improved during training dialogue speech (the ability to solve language problems by communicative means in concrete forms and situations of dialogues.

Dialogue is educational unit in which language is presented in a functional-system. Language is a special kind of the maximum intellectual, speech activities of the person.

Dialogue is created as a certain message about subjects and about the phenomena of the validity, reflecting attitude to them and the author´s influence on listening person (Dridze T.M., Zimnjaja I.A., Leontiev A.A., etc.).

Dialogue is the complex unit uniting all levels of language and speech (linguistic, semantic, psychological), helps to solve the problems of formation of foreign students´ communicative culture.

Training dynamism, stability, plasticity, purposefulness, openness, consciousness, efficiency of dialogue speech defines a level forming communicative culture of foreign students as these qualities determine adequacy of speech behavior to a communicative problem which is solved by authors of created dialogue-statement as a product of speech activity.

So, in such process dialogue - a complex method of training which realizes hierarchy of the purposes of the personally-focused training:

Increase of a learning efficiency dialogue speeches, creation of conditions for strong mastering knowledge in a broad sense this word (as knowledge and practical skills) sees not only in perfection of the maintenance of knowledge, but also in perfection of receptions of management by formation theoretical and practical готовностей on the basis of activization речемыслительной activity of students. In other words, it is necessary to arm the student with skills to use rational ways of purchase of knowledge and their processing. It substantially will relieve trainees of an excessive expense of time and energy that as a whole will promote an intensification of process of training to dialogical interaction of foreign students.

The work is submitted to the International scientific conference "Modern science technology", Tenerife, Spain, November, 20-27, 2008. Came to the editorial office on 14.10.2008.