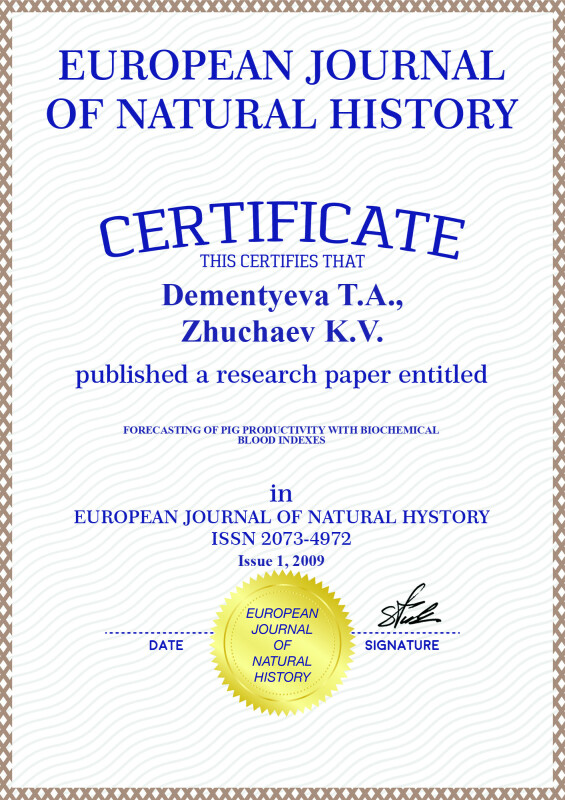 The use of genetic, biochemical and other interior parameters is an intensively advancing direction. Lipids are the group of substances distinguished by chemical composition and functions. Triglycerides are the most common lipids. Lipoproteins are complex compounds which basic function is to transport lipids. In blood there are several classes of lipoproteins. Low and high density lipoproteins (LDLP and HDLP) are referred to them. Lipoprotein spectrum of blood serum can vary with some diseases in man and animal.

An experiment was made on the experimental training farm of the state breed stud (SBS) "Tulinskoye" under Novosibirsk State Agrarian University. The object of investigations was made up of the pigs from UKM (universal Kemerovo breed stud pigs). The content of (LDLP and HDLP) triglycerides were determined in the blood serum of the pigs. Biochemical indexes of blood were examined in the pigs aged 1.5; 3; 4; 5 and 6 months.

When investigating the content of triglycerides in the blood serum of the UKM pigs, it was established that the maximal rise of their concentration was in the 3-month pigs vs. those aged 1.5 months (28.95%, p < 0.001). In the next following age periods the level of triglycerides went down which was further replaced by their building up in the animals of 6 months old (18.42%, p < 0.05). The lowest concentration of high density lipoproteins in serum was recorded in the pigs aged 1.5 months. The determination of HDLP amount showed that it was higher in the 3-month piglets. Considerable increase in the HDLP content was identified in the 4-month animals (20.63%, p < 0.001) vs. those of 1.5-months old. Gradual decrease of the concentration of the examined parameter was observed in the serum of the gilts in the next following age periods. The UKM animals were marked to have the minimal count of low density lipoproteins at the age of 3 months. The growing level of the determined index was identified in the same-aged at 4 and 5 months, it reached maximal value (2.56 mM/l, p < 0.001). The 6-month gilts were found to have the decline of the HDLP content in blood serum. Correlation was revealed between indexes of lipid metabolism and pig productive traits. Correlation dependence between the count of triglycerides, lipoproteins in blood serum and indexes of meat productivity in pigs was of middle and weak degree of relationship. The strongest correlation coefficient (r = 0.523, p < 0.001) was detected between the serum concentration of triglycerides and lard depth over the 6 - 7th thoracic vertebra. In the experiment there were revealed age changes of triglycerides and lipoproteins in the blood serum of the UKM pigs. The growing level of triglycerides and HDLP in the serum of the 3- and 4-month animals testifies to the more intensive organism energy exchange during this period.

The great concentration of triglycerides in the serum of the 6-month pigs is associated with the period of intensive adipopexis (fat building up).