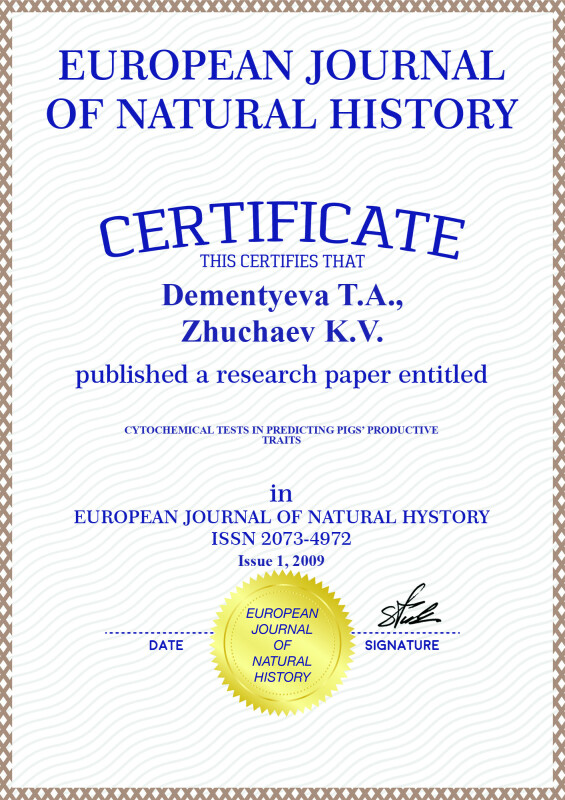 One of the main directions in improving genetic and breeding methods is to search for interior tests to assess precocity and productivity in pigs. The interest arisen to cytochemical methods of determining cell ferments is due to the fact that changes in blood lymphocytes are visualized much earlier than occur morphological and quantitative changes in blood proteins. Cytochemical examinations allow to evaluate conditions of different organs and tissues in a blood drop avoiding biopsy and can be done in dynamics by which there can be determined the state of exchange processes of a whole series of organism systems.

An experiment was made on the experimental training farm of the state breed stud "Tulinskoye" under Novosibirsk State Agrarian University. The object of investigations was made up of the pigs from UKM (universal Kemerovo breed stud pigs). With cytochemical methods applied there was determined the activity of ferments in lymphocytes, that is, succinate dehydrogenase (SD) and glucose 6-phosphate dehydrogenase (G-6-PDG) which are involved in the exchange of energy, proteins, fats and carbohydrates; and the amount of lipids and glycogen - in neutrophils. Blood cytochemical indexes were examined in the pigs aged 3, 4, 5 and 6 months.

The SD lowest activity in blood lymphocytes was identified in the pigs aged 3 months. The maximal growth of enzymatic activity was found in the pigs aged 4 months (26.13%, p < 0.05). The high level of fermentative activity is maintained at the age of 5 months. In the next going age periods the activity of the enzyme was observed to go down. Considerable G-6-PDG activation in blood lymphocytes was revealed in the pigs aged 4 months (39.49%, p < 0.001). Regarding the 5- and 6-month age, the enzymatic activity was marked to gradually go down. Investigations in age dynamics of glycogen level in blood neutrophils showed glycogen increase at 4 and 5 months (p <0.001) and subsequent decrease in its concentration at 6 months. Low content of lipids in blood cells was found in the 3-month piglets. Gradual growth of the content of lipids was identified in blood of the animals under 5 months and it was high even at 6 months.

The relationship between cytochemical tests and productive traits of pigs is testified to by correlation coefficients. The negative aspect of the relationship was observed between precocity, SD activity, G-6-PDG, glycogen level and lipids in animal blood cells (r = -0.214 - 0.393, p < 0.05 - 0.001). As a result of the experiment it was established that cytochemical markers can be applied to assess precocity and productivity of pigs.