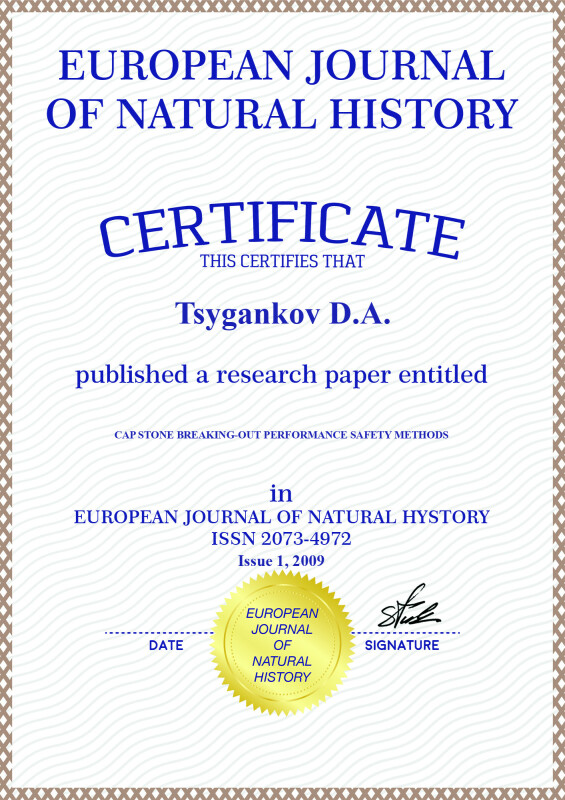 The principle of providing comfortable conditions of work at a mining venture is the development and introduction of techniques and technologies of breaking out useful minerals excluding the occurrence and influence of negative factors of production on the human body. Thereat, it is necessary to take into account that the main reason of traumatism consists in the subjective attitude of the human to hazardous factors of production, and that of morbidity - in the efficiency of preventive measures against harmful production factors and the human´s personal physiological features.

At the procurement of natural stone the drilling-and-blasting, drilling-and-wedge and drilling mud methods with unexplosive destroying compositions, cutting with rope and rotary saws, ring cutters, bars and thermal spalling are the most popular ones. The drilling-and-wedge method is applied at the hard rocks procurement, but very seldom - independently. At the procurement of average and low strength stone the cutting method gained its popularity. The drilling-and-wedge method in the specified case is tended to be changed by highly mechanized methods. In the open cast mines, where natural stone is broken off by cutting, it is used in supplementary works, when stabilizing monoliths or giving them a regular form.

A comparative evaluation of all the cap stone breaking-out methods being currently in use has been carried out, inclusive of the method based on plastic substances application. The worksites were certificated on microclimatic, vibration and noise working conditions; the severity and intensity of physical labour mechanized forms being also analyzed.

It follows from the analysis carried out that the work performance using all the considered breaking-out methods, exclusive of thermal spalling, doesn´t promote the above-level change of temperature, speed and air humidity of the operating space, provides optimal well-being at the existing effective and effective-equivalent temperatures. The design features of the equipment used at the cap stone breaking-out drilling methods condition optimal and permissive labour provision on the vibration action. By contrast to this, the performance of work using methods based on cutting and thermal spalling is connected with the above-level vibration action, that is partially compensated by the absence of a permanent contact of the worker with the cutting tool and short-run static holdup of the thermal spalling plants during the work. The noise characteristics of the equipment applied at drilling, cutting and thermal spalling exceed the exposure limits. The worst factors are referred to the thermal spalling, that is connected with giving and burning of the hydrocarbon fuel jet under heavy pressure. However, the above-level noise of perforators, rock breakers and explosions at the natural mineral breaking-out drilling methods is mainly low-frequency and broadband unlike high-frequency and narrowband noise of rope and rotary saws, ring cutters and bar machines. This points to the fact that the above-level noise associated with the application of natural stone breaking-out drilling methods are less dangerous for the human, than those associated with its cutting. The current mechanized forms of physical labour conform to the permissible rates in its severity and intensity everywhere.

It appears from this that irrespective of the carried out preventive measures against the occurrence and influence of harmful production factors, the drilling-and-wedge technologies of stone fracture are the most secure ones on their action on working conditions.

The work is submitted to the International scientific conference "Modern science technology", Tenerife, Spain, November, 20-27, 2008. Came to the editorial office on 15.10.2008.