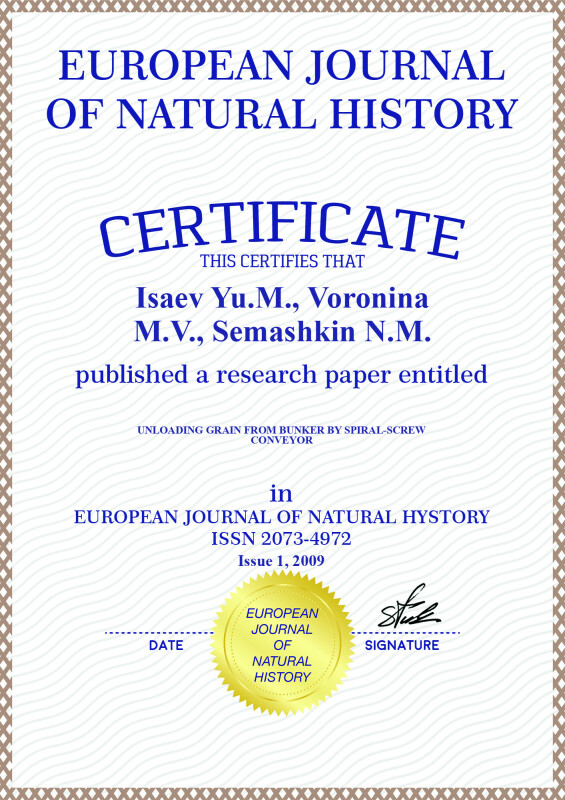 In bunkers spiral-screwed conveyors are applied to storage of grain at unloading in casings, and also without casings. For reduction of capacity of a drive above a spiral stabilizing plates at various height from it can be installed.

By preliminary researches it is established that grain is unloaded by spiral-screwed working body from that site of the bunker which is most removed from unloading windows. It is necessary to explain the reason of this phenomenon to that the material a screw surface of a spring moves more actively, than the material which is being above the given layer, not having thus of free space for the expiration.

Grain acts in space of a rotating spring and mixs up in an axial direction up to unloading apertures. Speed of movement of layers of grain is not identical and as a result movements of a grain stream the active layer which reason is force of internal friction is formed.

Proceeding from complex internal essence of a bulk material which separate particles are bodies, and all weight has aspiration to current, for the description of behaviour of a "current" loose material it is convenient to assimilate to its some viscous liquid with average, volumetric density and factor of viscosity (internal friction). On the basis of the accepted hydromechanical model dynamics of a loose body can be described the equations similar to equations Navie -Stoks for a viscous liquid.

The received analytical dependences allow to find distribution of speeds at movement of a grain material and to explain features of its unloading from the bunker. Also it is received, that submission of the spiral-screwed conveyor at an unloading of grain from the bunker without a casing in comparison with a casing increases due to an active layer almost twice at the same parameters of a spring and angular speeds of its rotation.