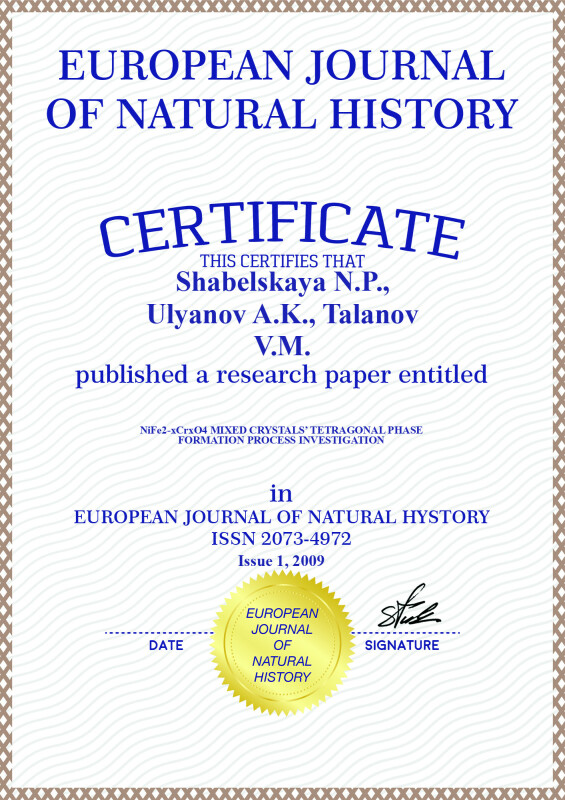 In crystals containing transition elements ions, the normal state of which is orbitally degenerated, a spontaneous distortion of polyhedra can occur. Thereat, a crystal field symmetry reduction and transition element atomic energy level removal (Jahn-Teller effect) take place. If a crystal contains Jahn-Teller cations in a sufficient concentration, there appears a cooperative distortion of coordination polyhedra, the crystal symmetry reduction taking place thereat. It is significant that the formation of low symmetrical crystal modifications is attended by a spontaneous appearance of abnormal physical and chemical properties in them. The NiFe2-хCrхO4 mixed crystals symmetry reduction is conditioned by Jahn-Teller ions Ni2+. In the given work the results of various history NiFe2-xCrxO4 mixed crystals´ tetragonal phase formation investigation are quoted.

The NiFe2-xCrxO4 mixed crystal samples were obtained on the ceramic technology out of corresponding oxides. The thermal treatment was carried out in 10-hour cycles at the temperature of 1100 - 1200 оС. The synthesis fullness was controlled by means of the Roentgen phase analysis. At the computation of the diffusivity coefficient D the formula [2] was used: h2 = 2Dvτ. Here h - is the formed product layer thickness, cm: D - the diffusivity coefficient, сm2/с; v - the resultant unit volume expansion at the transferal of one mol of ions; τ - time, sec. When calculating v, the ratio of the bivalent metal oxide density (ρNiO = 7,45 г/см3 [3]) to the roentgen density value ρroent of the spinel solid solution on [1] was used. The calculations results are represented in the table. The diffusivity coefficient value D of nickel ferrite (II) at 1200 оС (D = 1,99.10-9 сm2/с) is in satisfactory agreement with the one calculated at 1255 оС according to the method of Boltzmann-Matano for NiFe2O4 D = 2,2.10-9 см2/с [4].

The diffusivity coefficient temperature dependence is expressed by the equation analogous to the Arrhenius one [5]: D = D0exp(-Q/(RT)), with D0 - is a temperature independent factor, which is formally equal to the diffusivity coefficient at Т→∞; Q - the diffusion process activation energy, kJ/mol; R - a universal gas constant, J/(mol.К); T - temperature, K. The D0 calculation results are represented in the table. The diffusion activation energy value Q was defined by the graphical method according to the straight line inclination tangent in the coordinates lgD - 1/T.

In the tetragonal phase existence area an increase of the diffusion activation energy (by 12-13%, see table) takes place. Apparently, in this interval of compositions there appear additional kinetic difficulties for ions´ movement. An analogous jump (6-fold approx., see table) is registered in the dependency D0 (х). For the explanation of the Q (х) and D0 (х) curves´ appearance it was supposed that the spinel formation process kinetics is influenced by the structure factor. Due to the fact that the spinel synthesis was carried out in 10-hour cycles, really the structure formation process ran discretely as well. According to the calculation carried out for the NiFe0,8Cr1,2O4 sample the formed product layer covered about 1,3% of the crystal for 10 hours. At the fall in temperature (cooling down) the structure is distorted due to the cooperative Jahn-Teller effect, a tetragonally shortened spinel being formed. Additional difficulties for the cation diffusion in vacant structure points rise in such a structure owing to the oxygen frame distortion. In the course of the following heating cycles the process of diffusion in "narrow" places is discontinued until the temperature increase takes the lattice distortion off. Because of this phenomenon the spinel structure formation reaction rate decreases as a whole.

For the purpose of the given supposition verification a synthesis of NiFe2-xCrxO4 spinels into one stage with an activating additive of potassium chloride at 900 and 1000оС was put into effect. The energy of spinel formation reaction activation at the presence of potassium chloride is less by approximately 50% compared to the energy of a common solid phase reaction. Such a result can be associated with a change in the spinel formation process mechanism: it seems that in the mass transfer process a three-valence metal halide takes part (analogous results were obtained in the work [6]). In the process of NiFe2-xCrxO4 spinels synthesis with a potassium chloride additive there is no change in the synthesis duration for low symmetry phases. The obtained result doesn´t contradict to the earlier said supposition about the rise of kinetic difficulties in the process with a cyclic character of heating and cooling.

Thus, in the course of NiFe2-xCrxO4 mixed crystal structure formation process study it has been established that in the area of tetragonal phase formation with tetragonality parameters c/a<1 the diffusion process activation energy value Q has an anomalously high meaning. It can be associated with the kinetic difficulties rising due to the formation of the product with a distorted structure preventing the cation diffusion into the reaction zone at the succeeding thermal treatment cycles. In the course of spinel formation processes in one stage with the potassium chloride participation the formation of low symmetry phases has the rate similar to the one of the cubic phase.