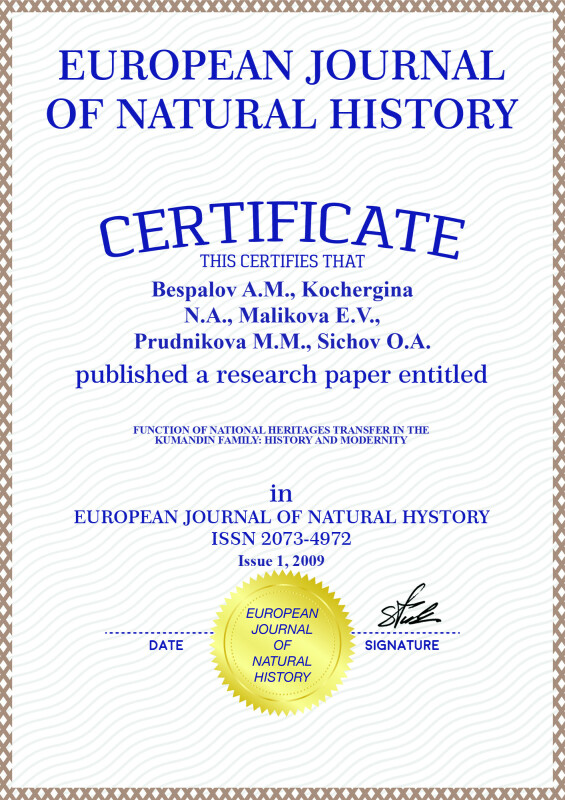 FUNCTION OF NATIONAL HERITAGES TRANSFER IN THE KUMANDIN FAMILY: HISTORY AND MODERNITY

The social and sociocultural situation in conditions of various cultures interpenetration, where a modern family develops and functions, is characterized by many research workers as the identity crisis (G.M. Andreyeva, T.M. Buyakas, A.V. Kuzmin, A.V. Lukyanov, D. Orlov, L.M. Putilova and others). The transformation of traditional family patterns, the shift of emphases of the family group for the purpose of preservation and transference of ethnic experience of life mode unification to the subsequent generations can be one of its manifestations in the sphere of family relationships. The given problem emerges especially acutely before the peoples, the number of which is steadily decreasing. Kumandins belong to such ethnic groups´ number.

According to the population count of 2002 there resided 2888 Kumandins in the Russian Federation, among them 1663 persons - in the Altai Territory, 931 - in the Republic of Gorny Altai, 294 - in the territory of Kemerovo Region. Young people under 30 years of age make 1056 (36,6%) persons, among them 461 or 16,0% are still not in their active working age. The productive age Kumandins make 1867 (64,6%) persons. The average age of Kumandins is 40,9 years old. By the present moment Kumandins are integrated into the social and cultural life of the Russian people to a great extent: in most cases the language they use in their every day life and in the family is Russian. A little more than one third of the Kumadin representatives speak their vernacular language (34,9% of the total population of those living in the Altai Territory).

The interest of our research has been the Kumandin family, as the transfer of traditions, customs, and modes of being is exercised, first of all, through the organization of the family way of life, matrimonial and children-parents relationships. In the native philosophy and psychology a significant meaning is given to the investigation of functional features of a family group (V.N. Druzhinin, I.N. Gavrilenko, N.N. Obozov, A.N. Obozova, A.G. Kharchev and others). The following functions are marked out among the principal functions of the family: the reproductive one, the function of primary socialization, educational, communicative, psychotherapeutic and other functions. Within the framework of the given article we are facing the problem of considering how the function of transfer of national family traditions affecting the process of ethnic identification of the younger generation in Kumandin families is realized. The research was carried out in the city of Biysk and in the areas of compact settlement of Kumandins in Krasnogorsk and Solton Districts of the Altai Territory. We specify the data received in the course of inspection of 22 complete Kumandin families residing in the rural area (48% of the total number of the families).

Let us notice, first of all, that traditionally (according to the data of the informers taking part in the depth interview) Kumandin women espoused at the age of 17-18 and men made their families a bit later - at the age of 20. Present day boys and girls marry having reached the same marriage age. According to the Q-data we got the following information: 61% of men-respondents contracted their marriage at 20, 89% of women got married at 18 and later.

The traditions of family making and functioning in Kumandins for the last two hundred years experienced an essential transformation, that was connected with the changes in their socioeconomic status, conditions of life and nature management. The ultimate fact is of prime importance, as the traditional life of Kumandins and their business activity were closely interlaced into the natural processes. According to the results of ethnographic research of XIX-the beginning of XX centuries the blood-tribal relations prevail in the social relations of Kumandins, that contributed to the existence of definite forms and elements of matrimonial-family relationships. So, N.P. Dyrenkova marks out a range of matriarchy features in the matrimonial-family relationships of the Altaic ethnoses, and in Kumandins as well [1, 2]. In particular, it is referred to avenkulat, i.e. especially close relation between the maternal uncle and nephew, - a custom preserving its meaning in Kumandins for a long time; and also the bride price, the ceremony of forgiveness, the duty of son-in-law to help the family of his wife, the ritual of building a hut for the bride, etc. The remembrances of some of these features in Kumandins have lived up to our time.

Thus, during our investigations, the informers A.I. Kazagacheva, V.I. Kukhtuyekova, G.P. Koltychakova, V.T. Belekova, A.P. Teberekova, L.G. Yelbayeva and Ye.I. Tukmacheva, who we are so grateful, told us about the tradition to dress the bride in a hut before the wedding. Before the wedding Kumandins make a spousal hut of nine young birch-trees, which are brought to the forest and heel in there after the wedding ceremony. There is a token that if at least one tree strikes a root, the young marrieds will live a happy family life. On the wedding day the bride coated with a beautiful veil (the face is covered) is shown in the hut, where her girl-friends braid her hair into two plaits. As the informers explain, the two plaits symbolize that from this moment on the woman is no more alone, she has got a match. The bride´s plaits are braided/intertwined "inwards, down". The married woman doesn´t appear in public uncovered any more. A fire is made before the bride; the meat, which the groom treats the girls braided the bride´s plaits, being cooked in a pot over the fire. As they leave the hut the newly married couple and the girls are poured over with water. In winter they are dipped in snow ("kuryayut"). Then the just married come in the house, where meat cut in solid lumps - bones are not hacked, but are divided in joints - is being cooked in big pots (horse beef usually). The bridegroom puts the slabs of meat into wooden bowls, throws the embroidered towel over his shoulder and the young marrieds go to treat the guests. The round is made with the guests of note, who get the biggest bones with meat. The tribute of respect to the invited guests is manifested in it.

The attention should be paid to one more point of interest of the wedding ceremony organization. In ancient Kumandin traditions only the groom´s relatives are present at the wedding feast. The bride´s relatives don´t take part in the tableful.

To collect the information about the preservation of family actions and traditions we worked out a questionnaire. The analysis of the data obtained testified that 74% of women-respondents do not know about the tradition to dress the bride in a hut before the wedding and, therefore, do not observe it. As for the participation of the groom´s relatives in the wedding celebration, this tradition hasn´t survived at all. 84% of women and 83% of men answered the question "Which of the guests was present at your wedding ceremony?" : the bride´s and groom´s relatives.

The description of the family ritual of forgiveness is of great interest. The groom and bride together with their marriage brokers went after the wedding in the groom´s house to the bride´s parents´ house and asked for forgiveness from the mother and father. The groom´s parents decided when they would go to the bride´s house for forgiveness. Thereat, the forgiveness date was not reported in advance. The young marrieds were no party to the tableful, they aught not to cross the doorstep of the house and waited for their being forgiven near the doorstep on a bench. In the interim the groom´s parents, the marriage brokers paid the bride-price with (money, vodka, livestock) - whatever the bride´s parents claimed for. According to the Q-data 50% of men and 21% of women do not know about the ritual of forgiveness. The action was performed after the wedding by 11% of the rural families taking part in the investigation.

At the same time the changes taken place in the matrimonial-family relations of Kumandins can also be mentioned. Thus, if N.P. Dyrenkova points at the existence of group marriage traces in Kumandins, the studies of the middle of XX century [for example, see 3] and also our researches testify that these traces either vanished completely (except for their reflection in the language) or remained, but in the form of rudiments. In particular, the levirate and sororate (a custom to take in marriage one´s wife´s sisters) ascending to the group marriage are preserved in the rudimentary form in Kumandins. Practically all our informers noted that, if a woman has lost her husband, she will never be left in the cold on the part of his relatives in the Kumandin families. Very often the younger brother takes the child-rearing responsibilities and sometimes husbandly duties towards the widow as well, on himself. However, nobody of the informers mentioned the existence in the man of the right to sexual intercourse with his (native or collateral) elder brothers´ wives, all the more the existence in the woman of the right to sexual relations with younger brothers of her husband, that is described in the research of N.P. Dyrenkova [1, p. 41]. It is the testimony for the fact that in XX century this tradition has completely disappeared from marital relations.

The frames of the given article do not allow describing the transformations taking place in the family ritualism of Kumandins to the full extent. However, the facts described here testify to their significant alternations and in some cases - the total loss of family rituals (a bride stealing tradition, for example). In our opinion, it is connected both with the alternations taken place in the life activity of the whole society and Kumandins as well, and also with a wide spread occurrence of mixed marriages among Kumandins since the beginning of XX century.

The research has been carried out with the financial support from the RHSF within the framework of the RHSF Research and Development Project "Social-Psychological and ethnocultural features of modern Kumandin family functioning", Project № 08-06-60603а/Т

The work is submitted to the International scientific conference "Modern science technology", Tenerife, Spain, November, 20-27, 2008. Came to the editorial office on 19.10.2008.