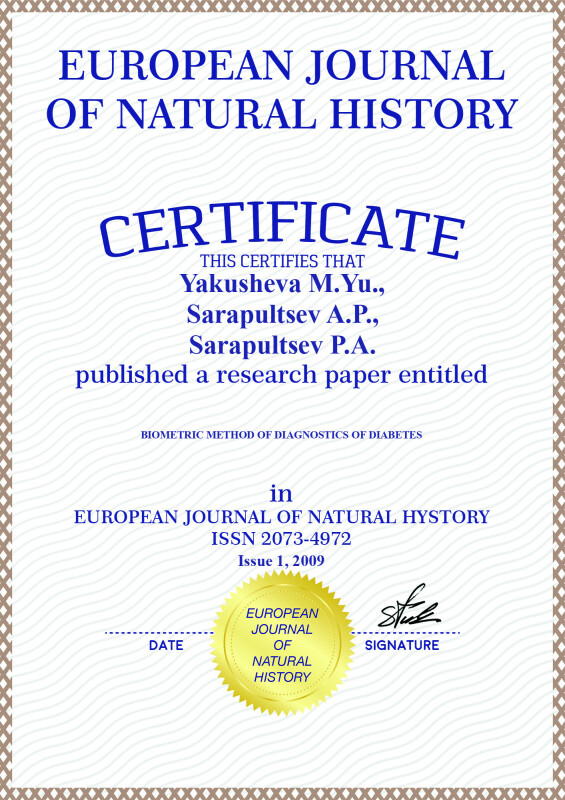 BIOMETRIC METHOD OF DIAGNOSTICS OF DIABETES

The omnipresent growth of diabetes incidence in economically developed countries and the pathology conditioned by it and causing not only medical, but also social-and-economical problems in the society, defines the topicality of the investigation carried out. However, there are no authentic data concerning the value of individual disposition and pathophysiological mechanisms of its development up to the present moment.

The main task of the carried out research has been the development of biometric methods of II type diabetes predisposition general criteria detection. The offered methods of screening study based on the human dermatoglyphic picture analysis are simple enough, economic; they don´t require expensive equipment, chemical agents and highly qualified personnel for their realization; they are noninvasive and easy for the patient. At the examination the dermatoglyphic signs of palms and fingers of both hands are read by means of a special fingerprint scanner, then they are treated with the help of a special computer program. To detect the diagnostic criteria of II type diabetes development we examined 63 II type diabetes patients by the dermatoglyphic method, the control group was made of 63 persons without diabetes, who were chosen by the method of "directed selection" according to their age, sex and nationality. The mathematical classification techniques based on the image discrimination theory were used to treat the material. Due to the research the following dermatoglyphic picture characteristic features have been detected in the II type diabetes patients: the general, total and palmary crest count increase ab, bc, cd, the increase of number and width of palm lines, the axial triradius position in the intermediate t¹ and lateral t¹b position, the palm triradius reduction c, the occurrence of any patterns in the hypothenar and curlicues in the interdigital zone. The developed biometric methods based on the dermatoglyphic picture analysis are able to detect general criteria of predisposition to diabetes development.

The work was submitted to international scientific conference «Basic and applied research in medicine», Nov. 26 - Dec. 4, 2008 China (Beijing). Came to the editorial office 15.10.2008.