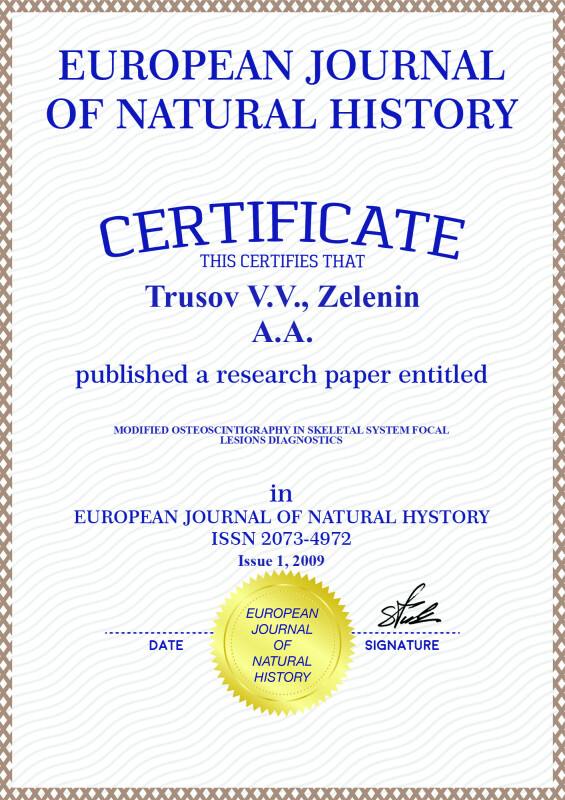 A traditional method of metastatic lesion foci visualization is the method of osteoscintigraphy with the preparation Technephor-Tc-99m, which represents a sodium pertechnetate lyophilizate and has an ability to get involved in the phosphoric metabolism, be connected with calcium hydroxylate and accumulated in the skeleton.

A standard osteoscintigraphy method supposes an intravenous introduction of Technephor-Tc-99m and a polypositional examination in a gamma-camera after a three-hour interval necessary for the preparation fixation in bones and pathological formations. It should be noted that the preparation is excreted through kidneys and, at their disturbed function, which is especially often detected in the patients with metastases at cancerous lesion of prostate gland, the preparation fixation occurs in the distorted pelvicalyceal system, which can look like a pathological fixation point in lower ribs in many views. In this connection a standard examination was modified by us. The primary administration was exercised directly under the gamma-camera detector resting on the lumbar region to visualize the preparation excretion through kidneys with the first 20 minutes record.

Due to our investigation: in 573 patients the preparation pathological fixation foci were detected. Most commonly (about 69%) the foci were visualized in the hip bones, back bone (about 60 %), ribs and breast bone (about 443%), limbs (about 21%), cranial bones (about 10%). A single pathologic focus was detected only in 19% of the cases. In the rest situations a multiple affection (from 1 to 12) was detected.

It should be emphasized that in 132 patients (23% of the patients) the detected alterations were wrongly evaluated at the X-ray examinations as degenerative-dystrophic or traumatic ones, or as the alterations of inflammatory character. In 13 patients the osteoscintigraphy method allowed not only verifying the metastatic lesion foci, detected by the CT, but also detecting new, not found out earlier, ones.

The modification of the method with preliminary visualization of kidneys allowed not only detecting the presence of the inadequate filtration-excretion function of kidneys, but also taking the findings into consideration at the following analysis of the focal lesion in the gross per cent of the cases. This data consideration allowed excluding a falsely visualized abnormal fixation focus of the preparation in 51 patients (21 prostate gland cancer patients and 30 patients with a pathological process of other focalizations).

The work was submitted to international scientific conference «Basic and applied research in medicine», Nov. 26 - Dec. 4, 2008 China (Beijing). Came to the editorial office 22.10.2008.