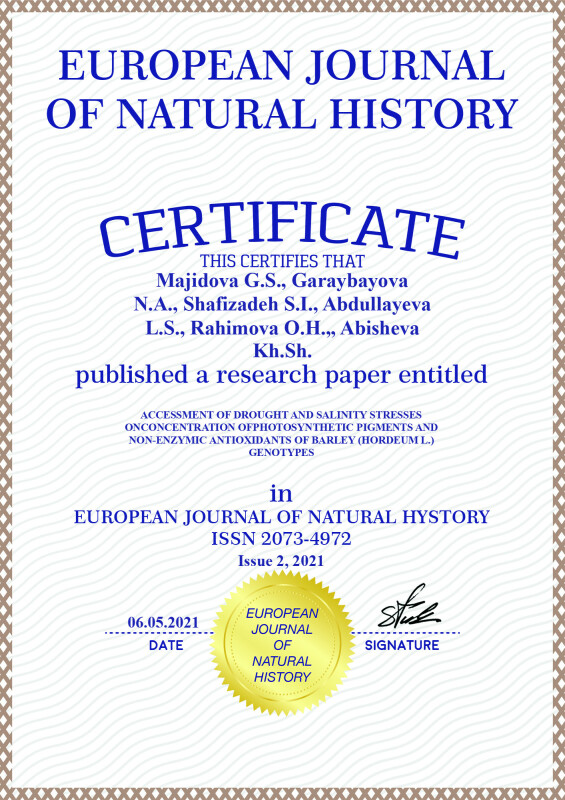 1
Majidova G.S. 1 Garaybayova N.A. 1 Shafizadeh S.I. 1 Abdullayeva L.S. 1 Rahimova O.H., 1 Abisheva Kh.Sh. 1 Hasanova S.G. 1
1 Genetic Resources Institute of ANAS
A number of physiological and biochemical processes occur during the effects of stress factors on the plant organism. It is possible to study these processes with different diagnostic methods, to give basic information about the resistance of plants to salinity and drought. Using these methods in the study, salinity and drought resistance of three barley genotypes Nutans- Karabakh 7 variety, Nutans (Georgia) x. Spontaneum F7 and Nutans (FAQ mater varp. Spontaneum) were studied. İnitially, the effect of salt and drought stress on plant height was studied in comparison with the height of plants under stress and the height of plants in the control variant. As a result of the study, growth retardation of stressed plants was observed in comparison with the control variant, and the growth retardation increased with increasing stress intensity. One of the methods for assessing plant stress resistance is the study of changes in the absorbance of chlorophyll. Under the influence of stress factors, destruction of chloroplasts leads to a decrease of chlorophyll content. Resistance of samples depends on the degree of pigments exposed to change by stress effect. According to this indicator, only one of the 3 genotypes of barley is Nutans (Georgia) x. Spontaneum F7 is considered as the most resistant to both salt and drought stresses. Studies of the proline, a biochemical marker of resistance, also show that changes in the amount of this acid in the plant organism occur as a result of stress factors. Thus, the amount of accumulated amino acids increases, as the increase of concentration of stress factors occurs. Our studies have shown that with an increase in the concentration of stress factors, the effect of stress also increases and significantly manifested in the morphological, physiological and biochemical parameters of the plant.

Recent climate change has aggravated the environmental situationand led to the salinization of arable land. Therefore, one of the urgent problems of our time is the identification of stress resistant, as well as economically important plant varieties and forms, and the provision of their cultivation on such lands. Under the influence of stress factors (drought and salinity) on the plant organism, first the organism tries to adapt, resisting the conditions [1]. At this time, in the plant organism a number of physiological and biochemical processes happens. Thus, the process of breaking down starch into sugars, proteins into amino acids leads to an increase in the amount of non-protein nitrogen and, as a result, cell damage. The activity of the enzyme ribonuclease also increases and accelerates RNA decay and stops DNA synthesis [2].

Stress factors (drought and salinity) also affect plant growth. The accumulation of inhibitors (abscisic acid and ethylene) occurs and the number of stimulants, such as auxin and hibberlin, which stimulate growth, decreases. As a result, the amount of growth-delaying hormones exceeds the amount of growth-promoting hormones, which slows down the plant’s growth.

Under the effect of stress factors (drought and salinity), the amount of organic compounds such as sorbitol, glycine concrete and especially the amino acid proline increases several times. Also, as a result of stress (drought and salinization), plastids destruction occurs, which naturally reduces the chlorophyll content. The degree of changes in chlorophyll content impacts the tolerance of plant, which makes it possible to assess genotypes for resistance to stress.

If in such a situation the effects of stress stops, physiological and biochemical processes in the organism regenarate. İf the plant is not resistant, As the result of the impact of harmful factors, the plant will weaken and even die.

Therefore, in recent years, various diagnostic methods have been used to determine the resistance of plants to unfavorable environmental factors, to study the physiological and biochemical processes.

The study was conducted on 3 barley genotypes. These are as follows:

The aim is to study the morphological, physiological and biochemical changes caused by stress factors in the above-mentioned barley genotypes, and to provide diagnostic information about the resistance of these genotypes in relation to these changes.

During the study period, 100 seeds of each of these barley genotypes were germinated in Petri dishes at 210 °C. 8-day-old seedlings were subjected to drought stress with sucrose solutionfor 10 hours at 10 and 20 atm and to saline stress NaCl solution at 7 and 14 atm. Initially, comparative phenological observations were carried out on stressed plants of control samples. Then the studies were continued using various diagnostic methods. Plant height was measured with a ruler, chlorophyll density was determined with a Spad 2 meter, and the level of proline was determined by the Bates method on a spectrophotometer (UV-3100PC) at a wavelength of 520 nm. ...

Observations showed that studied due to the large number of germinating seeds and better plant development, Nutans (Georgia) x Spontaneum F7 barley hybrid differed both from the Standard Karabakh 7 and from other barley genotypes.

After 24 hours of exposing of the studied barley seedlings to stress factors, observations showed that the effect of the sucrose solution on the plants was more than the effect of salinity. The 34 hours impact of salt did not cause significant changes in plants. Afer these treatments he salt tolerance of studied genotypes of barley was observed.

As already mentioned, at the initial stage, the effect of stress factors (drought and salinity) on plant height was studied. It is known that the process of accumulation of inhibitors of growth retardation occurs under the influence of stressors, and growth retardation is observed because their amount exceeds the amount of stimulating hormones. Therefore, the height of stressed plants was studied in comparison with the control. As a result of the study, delays in the height of stressed plants were observed (Fig. 1).

As can be seen from the figure, both during a 24-hour drought and during salt stress, drought stress (10 and 20 atm sucrose) had a greater effect on plant height than salt stress. Due to the impact of 10 atm sucrose in the studied plants, delays of 2-6 % in height were observed in comparison with the control plants. However, as the concentration of the stress solution increased, this indicator also increased to 20 atm. varies within 4-7 % of the action of sucrose (Fig. 1). Fig. 1. Changes in plant height due to 24-hour drought stress Fig. 2. Changes in plant height due to 24-hour salt stress

As already mentioned, the studied samples were more resistant to salt stress. Thus, NaCl at 7 and 14 atm caused a smaller change in plant height compared to sucrose stress.

One of the methods for assessing plant stress resistance is the study of changes in the optical density of chlorophyll.

It is known that drought and salinity stresses change the optical density of chlorophyll, disrupts its structure, and reduces its ability to absorb light. Under strong stress, chlorophyll pigments are destroyed. The degree of stress depression was determined by comparing the percentage change in pigments after exposure to stress and the resistance of these samples to stress factors. The samples with less the pigments exposed to stress, are conidered as more resistant the samples [3].

By this method, we provided diagnostic information on drought and salt tolerance of 3 barley genotypes. The results are shown in Figures 3 and 4.

As can be seen from the figures, during 24 hours drought and salinity stress (10 atm. And 20 atm. Sucrose) effect of drought on the optical density of chlorophyll was more than salt stress effect. 10 atm. Although the optical density of chlorophyll in the leaves of barley samples under the effect of sucrose varied from 0 to 6 % compared to the control, this indicator also increased with increase of stress intensity (Fig. 3). Fig. 3. Changes in the optical density of chlorophyll under the influence of 24-hour droughtstress

One of three barley genotypes studied for chlorophyll optical density degradation, Nutans (Georgia) x Spontaneum F7 was the most tolerant to both salt and drought, Nutans-st Karabakh 7 and Nutans (FAO mater. Varp. Spontaneum) were more tolerant to salt tolerance yhan to drought (Fig. 4). Fig. 4. Changes in the optical density of chlorophyll under the influence of 24-hour salt stress

One of three barley genotypes studied for chlorophyll optical density degradation, Nutans (Georgia) x Spontaneum F7 was the most tolerant to both salt and drought, Nutans-st Karabakh 7 and Nutans (FAO mater. Varp. Spontaneum) were more tolerant to salt tolerance than to drought (Fig. 4).

In general, the high tolerance of barley samples to salt stress is explained by the fact that the genes for salt resistance in this plant are more active.

It is known that proline is one of the osmotic protectors that helps to regulate the osmotic potential in stressed plant cells. According to some authors, there is a positive correlation between plant resistance and proline levels. Therefore, this indicator is used as a biochemical marker of resistance [4].

The study was carried out on leaves of barley genotypes exposed to stress solutions of various concentrations. Studies of the amino acid proline have shown that the amount of this acid in the body also changes as a result of stress [5]. Fig. 6. Changes in the amount of the amino acid proline due to 24 hours of salt stress

According to this indicator, Nutans (Georgia) x. Spontaneum F7 was rated as highly tolerant to both salt and drought compared to other studied barley genotypes.

As a result of studies carried out using various diagnostic methods, it was determined that out of 3 genotypes of barley there are Nutans (Georgia) x. Spontaneum hybrid is more resistant to salt and drought than Standard Karabakh 7 and Nutans genotype (FAO mater. Varp. Spontaneum). As the concentration of stress factors increases, the effect of stress increases and is significantly observed in the morphological, physiological, and biochemical characteristics of these plants.